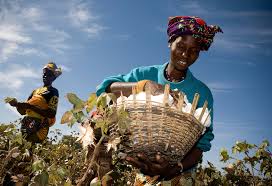 Nigeria approved two genetically modified varieties of cotton for use by the nation’s farmers to help boost supply to its textile industry and cut lint imports of as much as 115 billion naira ($319 million) a year, officials said.

The strains were modified by the Institute of Agricultural Research at the Ahmadu Bello University in the northern city of Zaria in collaboration with privately owned Mayco Nigeria Ltd. to include a gene that makes it pest resistant, according to Rose Gidado, assistant director at the Abuja-based National Biotechnology Development Agency.

The changes make it possible for these cotton types to overcome bollworm, “the most devastating pest in cotton production,” increasing output more than threefold to more than 4 tons per hectare, Gidado said in an emailed response to questions. They’re suitable for all growing areas in the country, mature early and have better fiber strength and length, she said.

Nigeria currently produces 60,000 tons of cotton annually, down from peak production of more than 100,000 tons four decades ago, importing the balance to meet requirements. Cotton farmers expect output in the coming season to reach at least 150,000 tons, as farmers deploy the new cotton seeds aided by credit facilities provided under a central-bank program in support of agriculture.

“We see these seeds significantly improving local production and increasing participation of our farmers who had previously been discouraged from producing cotton,” Anibe Achimugu, president of the National Cotton Association of Nigeria, said by phone from Abuja, the capital. “We are confident that we will be produce 150,000 tons at the minimum and 300,000 tons at the maximum.”

The central bank set aside 40 billion naira to provide credit to cotton and oil palm growers until 2020, according to Achimugu.

Nigeria should be cautious in adopting genetically modified crops given the negative results that have been recorded elsewhere, including the emergence of super weeds and herbicide resistance, according to the environmental group, the Health of Mother Earth Foundation, based in the southern Benin City.

“We believe GMOs are not needed in Nigeria,” Joyce Ebebeinwe, the project officer of the group, said in a statement. “The challenges in agriculture and of food sufficiency are such that they can be tackled through proper administration and adequate support for farmers in extension services, good roads to access markets, access to land and loans.”