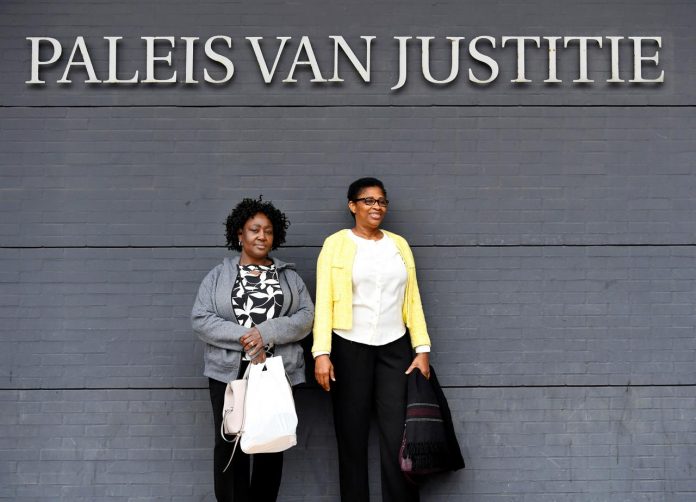 THE HAGUE – A Dutch court said on Wednesday it has jurisdiction to hear a damages suit brought against Royal Dutch Shell by four widows of activists executed by the Nigerian government in 1995.

The logo of Royal Dutch Shell is seen at a petrol station in Sint-Pieters-Leeuw, Belgium January 30, 2019. REUTERS/Yves Herman/File Photo
In a preliminary decision, judges at the Hague District Court said they would allow the suit to go forward, a rare win in a decades-long legal fight, though the claimants must still prove their case. Shell denies wrongdoing or responsibility.

“The court considers itself capable” of hearing the case, said presiding judge Larissa Alwin, reading the decision of a three-judge panel. “This procedure will continue.”

Dutch courts do not award large punitive damages claims, though the case has the potential to embarrass Shell and provide a measure of comfort for the activists’ families if it finds the company bears responsibility in their deaths.

The men executed were a group that became known as the “Ogoni Nine” – activists who included writer Ken Saro-Wiwa. They had protested against Shell’s exploitation of the Niger Delta until they were arrested and hanged after a trial widely seen as flawed.

Relatives have sought to hold the Anglo-Dutch energy company partially responsible in foreign courts, after exhausting legal possibilities in Nigeria.

Shell, headquartered in the Hague, paid $15.5 million to victims’ families in the United States in a 2009 settlement in which it also denied any responsibility or wrongdoing. The U.S. Supreme Court rejected U.S. jurisdiction in 2013.

“I am glad that the (Dutch) court has found it has jurisdiction,” said lead plaintiff Esther Kiobel, whose husband Barinem Kiobel was among the executed activists.

“My husband was killed like a criminal. I want him to be exonerated.”

Judge Alwin cautioned that the three-judge panel did not agree with assertions by the widows that Shell should have done more to prevent their husbands’ executions.

But she ordered the company to turn over documents that could help the claimants’ case, including any evidence that Shell might have made payments to people who gave false information to Nigerian law-enforcement officials.

“We continue to deny all the allegations in the strongest possible terms,” Shell representative Igo Weli said.

“Shell was not responsible for what happened. Shell actually made an appeal for clemency, but sadly this was not heard.”

Weli, who works for Shell’s Nigerian subsidiary, said the company would give the claimants access to internal documents as ordered.

No date has yet been set for a next hearing.