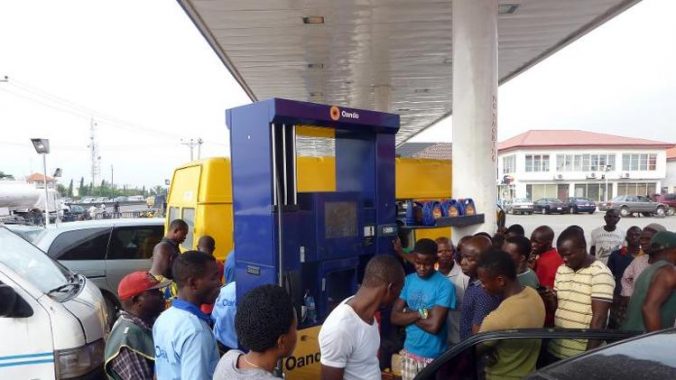 The Central Bank of Nigeria (CBN) has begun process for the payment of N112 billion second tranche of subsidy debts to major oil marketers through a promissory note, Naija247news has learnt.
Executive Secretary of Major Oil Marketers Association of Nigeria (MOMAN), Mr. Clement Isong, disclosed this in a chat with this newspaper.
Specifically, he said talks had begun between government and marketers over payment of the second tranche, adding that this would be paid immediately after the first tranche of N236 billion.
Out of the N348 billion approved by Federal Government’s audit as subsidy debts, the N236 billion issued through promissory notes, is expected to mature in December 2019.
“We are reconciling with government to collect the balance, which is likely to be a promissory note too,” he told this newspaper by telephone in Lagos.
Throwing his weight behind government’s policy and strategy, the MOMAN scribe stated that government should implement full deregulation of the downstream sector when it is practicable for it to do so.
“We, as MOMAN, want full deregulation as soon as possible, but we understand that government has got to be strategic in its implementation of the policy,” he said.
“Now, with regards to payment of outstanding debts (subsidy, interest and forex differentials), government gave us promissory notes, we are in the process of completing reconciliation with various government agencies – the Central Bank of Nigeria (CBN), the Petroleum Products Pricing and Regulatory Agency (PPPRA) and others, so that we are able to realise (access) the promissory notes. But the earliest time the promissory notes would mature is December, this year.
“Those were the words we were given already and we are reconciling with government to collect the balance, which is likely to be a promissory note too.”
The apex bank had earlier asked deposit money banks to forgo the interest charged on petrol subsidy-induced loans advanced to oil marketers from June 2017 to December 2018, our correspondent has learnt.
The CBN was said to have conveyed the message to banks at a meeting with marketers last year, as part of efforts to resolve the outstanding subsidy debts owed by the Federal Government to marketers.
Executive Secretary of MOMAN, Isong, said: “We had a meeting in December in Abuja and another one in Lagos where the CBN told the banks to reverse the interest from July 2017 till date. In the banks’ books, marketers owe N800billion; so it is a negotiation, with CBN acting for government. That debt is too big.
“CBN said to the bank, ‘Rather than lose all that money, reverse one third of it, and we will find ways to pay the balance. CBN did it on behalf of the ultimate debtor, which is government.”
He said some of the marketers had received from the Debt Management Office (DMO) promissory notes, which would be due on December 31, 2019, for the payment of the first tranche of N236 billion.

The Executive Secretary, Depot and Petroleum Products Marketers Association of Nigeria, Mr Olufemi Adewole, and the National Operations Controller, Independent Petroleum Marketers Association of Nigeria, Mr. Mike Osatuyi, confirmed the development in separate interviews.
“The request was from the Federal Government to the banks, to which the CBN Governor consented on behalf of the banks that all interest on subsidy-induced loans for Premium Motor Spirit would stop 30th June, 2017,” Adewole said.
Asked if all DAPPMAN members owed subsidy debts had received promissory notes for the payment of the first tranche, he said some had, while some were trying to vacate court judgments.
“Some banks, however, claim then that they await policy document from the CBN before acting on the notes, leaving marketers in the cold since submission of notes to them in December,” he added.
Osatuyi said no IPMAN members had received any payment, adding the Federal Government owed IPMAN Investment Limited N2 billion.
Last December, the Chief Operating Officer, Downstream, Nigerian National Petroleum Corporation, Mr Henry Ikem-Obih, after a meeting with officials of oil marketers in Abuja, told journalists that the remaining portion of the subsidy claims would be paid in 2019.
“We agreed that after the first tranche is paid, the marketers would form a committee to work on details of how the next tranche will be paid in 2019 and the last tranche in 2020. Government is fully committed to paying the first tranche as promised and it will be paid through a promissory note that would be issued by the Debt Management Office,” he said.