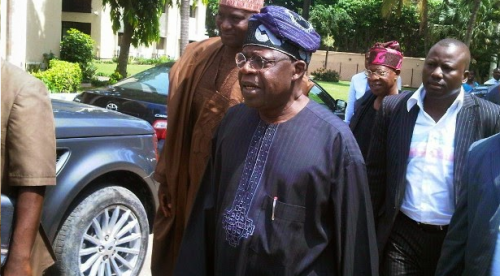 he Arewa Youth Forum (AYF) has accused Bola Tinubu, National Leader of the All Progressives Congress (APC), of turning himself into a dictator by trying to pocket the party’s structure.

The group made the accusation in a statement issued in Kaduna on Sunday.

They accused the former Governor Of Lagos State of trying to impose his stooges on the members of National Assembly, a move they described as “anti-democratic” and against the political interest of the North as a whole.

The northern socio-cultural group made the accusation in a statement jointly signed by Gambo Ibrahim Gujungu and Bello Abdulhamid, the National President and National Director, Public Affairs of the group, respectively.

The statement read: “To any right thinking and close observer of the polity, this unfolding development showcases Bola Tinubu as anti-North and is selfishly paving the way to have total control of the APC and its tidings, as well as influence the decision of the party chairman, all as a build-up to the 2023 elections.”

“AYF has received with surprise, the recent position of the National Leader of All Progressives Congress (APC), Asiwaju Bola Ahmed Tinubu, dictating who will emerge as the Senate President as well as the Speaker, House of Representatives for the 9th Assembly.

“We are also amazed by the statement credited to the party chieftain, where he was quoted to posit that party officials not comfortable with the choice and dictates of the party as orchestrated by him and some party officials are free to leave the APC. So much so that we consider this statement as unbecoming of the national leader, also, we believe that these dictatorial tendencies are undemocratic, unethical, not in line with international best practices, politically incorrect and in bad taste.”

The Northern forum condemned Tinubu’s approach as unbecoming of a true elder.

It said: “An elder who is supposed to toe the path of amicable resolution and embrace the spirit of reconciliation, particularly amongst the contestants, is openly found to be overbearing and divisive by all intents.

“The Arewa Youth Forum, therefore, maintains that this singular action, especially as it affects the National Assembly, smacks of the problematic issue of influence of godfathers, which overtime has been a serious draw back to the tenet of good governance, because the so called ‘godsons/daughters’ are in shackles, enslaved and captive to the whims and caprices of their bosses; hence the desirous and ever needed delivery of democracy dividends through good governance is stunted and threatened.”

Again Buhari appeals to herders, farmers to live in peace