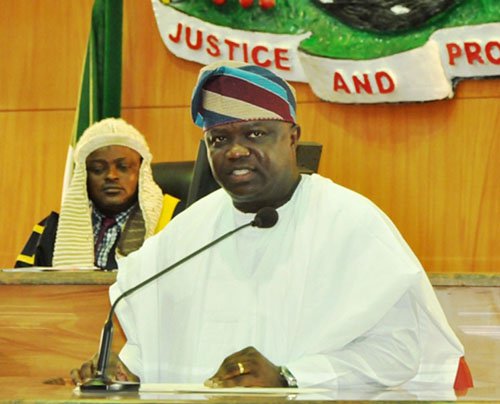 AS the Lagos State Governor, Mr. Akinwumni Ambode, prepares to hand over the reins of power to his successor, Babajide Sanwo-Olu, at Alausa on May 29, 2019, perhaps the greatest achievement for which he will never be forgotten is the conception and completion of the Murtala Muhammed International Airport, MMIA, Road in Lagos.

Motorists who regularly use the road, on Thursday, April 11, 2019, noticed that full street lights had come alive on the first phase which starts from Oshodi and ends at the Ajao Estate U-Turn. The beauty of the project which is still proceeding at steady pace day and night, is a sight to behold, especially at night now that the lights have been installed.

This former four-lane road, which the Lagos State Government started reconstructing roughly two years ago, has been expanded into a ten-lane marvel with two flyover bridges at Mafoluku and Hajj Camp and at least one pedestrian overhead bridge at Ajao.

When fully completed it will be a world-class masterpiece befitting of a country that likes to pride itself as “The Giant of Africa”. It will be a stunning departure from the old road that signposted the shame of a nation.

The old MMIA Road, apart from being narrow, was potholes-infested, with furniture makers, petty traders, fuel stations and commercial buses/motorcycles (Okada) struggling for space with users of the road, which is supposed to be the number one gateway into Nigeria from all parts of the world.

The situation was worse at night when the unlit corridor which was overgrown with elephant grasses seemed to welcome foreign visitors to the “kingdom of darkness”. Happily, those days will soon be over.

Yet, the road to this accomplishment was not exactly strewn with roses. Governor Ambode, in March 2017, went public with his feeling of frustration at the delay in securing the Federal Government’s approval to start work on its own road.

He blamed his immediate predecessor, Mr. Babatunde Fashola, the Minister of Works, Power and Housing for that. Fashola, however, denied the charge, pointing out that the delay was caused by adherence to due process.

All is well that ends well. Though Ambode will leave office disappointed for not getting the chance to serve for two terms, he can take solace in the outpouring of gratitude from all well-meaning Nigerians for this gesture of wiping the shame of the MMIA Road from the brow of the nation.

This is another confirmation that a serious government can start and finish major mega-projects within a term of four years.

We hope the road will be completed before May 29, 2019 to enable Governor Ambode entertain the honour and pleasure of hosting the inauguration of this game-changing signature project.