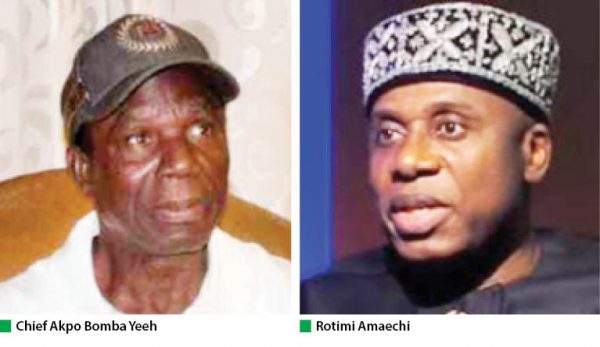 The last-minute defection of top-notch of the Africa Action Congress (AAC) to the Peoples Democratic Party (PDP) in Rivers State is causing ripples in the polity.

Yeeh, a running mate to Biokpomabo Awara of the AAC, resigned his position and defected to the PDP citing greed and high handedness on the part of their sponsors

He alleged that the Minister of Transportation, Chibuike Amaechi, forced him to sign a resignation letter on the ground that he will be replaced immediately the party comes to power.

He alleged that Amaechi signed a pact with them where the minister will nominate all the principal officers of the government and have overwhelming control of the state’s resources.

Soon after his resignation and defection Yeeh proceeded to Government House, Port Harcourt where he met with Governor Nyesom Wike.

He said that he decided to defect to the PDP because of his conviction that Wike is a man of vision. He added that as retired security personnel, he will work with Governor Wike to promote the security of the state. Yeeh informed the governor that he has officially withdrawn his candidacy of the AAC.

Shortly after his defection the Deputy Chairman of the party, Amezhinim Prince Atuma, also resigned from his position and defected to PDP.

Atuma who tore his membership card alleged that the AAC/APC alliance plans bloodbath to scuttle Rivers collation of the governorship election results. He explained that his decision to defect was necessitated by his commitment to the advancement of the democratic interest of Rivers State and the peace of her people.

Receiving the AAC deputy governorship candidate, Governor Wike said that no one man’s interest is bigger than the state, declaring that all leaders must work together to move Rivers State forward.

However, the AAC governorship candidate in the state, Engr. Biokpomabo Awara seems to be rattled by the defection of both leaders of the party. He expressed disappointment over the resignation of his running mate and his reported defection to the PDP.

Awara debunked claims by his erstwhile running mate that Amaechi and the APC, had made them sign resignation letters.

Speaking at a media briefing in Abuja, Awara dismissed as false all allegations against the minister, stating that Amaechi and the APC offered him and his party unconditional support, owing to their shared ideology and love for Rivers State and its people.

He also dismissed his running mate’s “compromising” actions as pathetic, claiming that he had himself been offered N3billion to drop his ambition, but rejected it and his deputy was aware.

In a reaction, the Director of Information and Communications of the Campaign Council, Emma Okah, denied the allegation by the AAC candidatethat he was offered money to drop his candidature.

Fayemi’s victory a demonstration of the people’s trust in APC –...