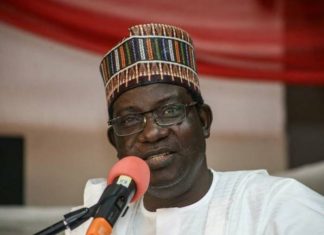 Officials of the Peoples Democratic Party (PDP) yesterday launched blistering attacks on the Independent National Electoral Commission (INEC), the police and the All Progressives Congress (APC), midway into the make-up election in Kano State, alleging rigging and intimidation of voters.

The PDP called for outright cancellation of the election.

The polls however continued and results from the various polling units appeared to be going in favour of Governor Abdullahi Ganduje of the APC who is seeking a second term.

He was fast closing the gap between the 98,7810 votes he got in the March 9 inconclusive election and the 101,4474 garnered by Abba Kabir Yusuf of the PDP .

The results were also in favour of Governor Samuel Ortom of Benue State and Alhaji Bala Mohammed ,the PDP flag bearer in Bauchi State.

Moments after the commencement of voting in Kano, the PDP acting chairman in the state, Rabiu Sulaiman-Bichi, called for the cancellation of the exercise across the 28 local government areas of the state, alleging that thugs had taken over the process.

“Today this charade called re-run election was slated to hold in Kano and other states but unfortunately, what we have in Kano is nothing but a sham,” Sulaiman-Bichi told reporters.

“Reports reaching us since yesterday (Friday) indicated that thugs have allegedly been mobilised to take over all the 208 polling units,” he added.

The thugs, according to him, were brought from Zamfara, Katsina, Kaduna, Plateau and other neighbouring states and were ‘armed to the teeth’ posing as voters in the polling units in the localities.

The chairman alleged that the thugs freely voted with PVCs that did not belong to them, while some posed as INEC staff.

He said as a peace-loving party, the PDP had alerted security agencies in addition to writing a Letter of Caution to the INEC Resident Electoral Commissioner in the state on the situation.

Soon afterwards, the PDP national publicity secretary, Mr. Kola Ologbondiyan joined in calling for the cancellation of the polls citing alleged disruption of voting and bloodletting by APC agents.

All material facts on the supplementary election, Ologbondiyan claimed, showed that thugs violently took over polling units, attacked and chased away voters and engaged in massive thumb-printing and ballot stuffing for the APC.

He also alleged that the police arrested the Commissioner for Special Duties, Muktar Yakasai alongside APC thugs while disrupting election in Yelwa in Dala Local Government area of the State.

He said:”also, INEC is already aware of how APC thugs attacked voters in polling units in Gama area of Kano State during which four PDP members were feared killed and many more injured before they carted away ballot boxes for stuffing for the APC.

“The PDP cautions INEC to note that in this circumstance, any results they come out with from this convoluted electoral process will be a sham and will surely be rejected by the people of Kano state.

“It is completely reprehensible that the APC and Governor Abdullahi Ganduje would resort to violence and bloodletting as a means to attempt to hold on to power after they have been rejected by the people.

“The PDP invites Nigerians to note that our party grew democracy for 16 years without watering the quest for power with the blood of the innocent as the APC has done in the 2019 general election.

“The PDP therefore charges INEC to save the nation from crisis by cancelling the Kano Supplementary election, as failure to do so is not in the best interest of our dear nation.”

INEC has nothing to count in Kano-Kwankwaso

The PDP leader in the Kano State ,Senator Rabiu Kwankwaso hurriedly called his own press conference to complain about the election.

Kwankwaso who is the immediate past governor of the state and father-in-law of the PDP governorship candidate asked INEC to conduct a fresh rerun election in the state.

He said there was no election yesterday as far as he knew..

He said:”It is very sad that elections could not hold today because, by yesterday (Friday) evening, all the polling units in the rerun areas were overtaken by thugs. Very early morning today, elections were concluded in many polling centres.

“There are very few places where elections took place, especially here in the city. But there was no election in the overwhelming places because they were overtaken by thugs. People were going around with ballot papers and result sheets, writing what they wanted and submitted them to the INEC officials.

“Our prayer is that these elections should be cancelled and re-scheduled so that we can have better, free and fair elections in Kano. I don’t think by all standards, the elections here in Kano can hold water. It is unacceptable and I don’t think INEC can go ahead to count because there is nothing to count.”

Police debunk reports of killings in Gama ward in Kano

“There was no such incident or arrest of some people in the any part of the state because the security arrangement was in order”, he said at a press briefing.

“We have not witnessed any incident because voting went on in almost all the polling units smoothly.

“There has not been report of any incident of thugs taking over polling unit. If thugs occupy any polling unit definitely INEC officials will not be there to conduct election.”

He also said the police arrested 10 people for various electoral offences during the supplementary election.

The suspects, according to him were arrested at various polling units where the elections were held.

His words: “we made some arrest at the early hours of this morning. I may not be able to give the exact number of the people arrested. I cannot tell you whether they are black or white in terms of identity; but I can tell you that some human beings were arrested and they are detained, being interrogated.

“They were arrested either found with sticks or in groups. We are arrested more than 10 of them. They are not party officials because you cannot identify them with PDP or APC membership cards.”

DIG Ogbizi also affirmed that there was adequate security arrangement across the state during the exercise, adding that, “I think to me, the security arrangement was quite in order. We did not witness any ugly incident, except minor and isolated incidences which were quickly addressed. Voting went on in all the polling units.

“The process of collating the result is on, some have now moved to the collation centres and there have not been any protest.”

He dismissed allegation by the PDP that the police compromised during the election, pointing out that, “one, if thugs had occupied any polling unit, certainly, INEC would not have been comfortable to bring out their materials to conduct the voting process.

“Voters that went to vote would not have been able to vote. Again, you know it is secret ballot, so we do not know which party or candidate the voters are voting for.

“We should refute that report on social media that some people were killed in Kano. Was the name of anybody killed mentioned? Where are the witnesses? If there are not, then what are you saying.

“Now, we heard that people were killed, houses were burnt, the Commissioner arrested people-all these we heard, we need to verify all these things, and they are not true.”

Information Commissioner Muhammad Garba denied claim that one of his colleagues was arrested by security agents during the polls.

Garba, who spoke to reporters, also described the reported loss of life due to violence in some polling units as white lies.

He dismissed such reports as mere propaganda by opponents of the government to discredit the conduct of the re-run elections after sensing defeat.

Results filtering in from some of the 40 polling units where the supplementary election took place in Plateau State showed that Governor Simon Lalong has maintained his lead over his closest challenger, Jerry Useni.

At the only polling unit in Shendam LGA – Gung -where Lalong hails from the APC candidate got 337 while Useni received 80.

Lalong led in five of the nine the LGAs where the supplementary election took place.

He was already ahead of Useni with over 40,000 votes in the March 8 inconclusive election.

PDP sweeps most units in Bauchi

Former FCT Minister Bala Mohammed looks set to displace incumbent Governor Mohammed Abubakar of Bauchi State with results from most of the 36 units where supplementary election took place putting him in a comfortable lead.

During the March 9 inconclusive election, Mohammed was credited with 469,512 votes and Abubakar 465,453.

The INEC first cancelled the result of the election in Tafawa Balewa Local Government Area on account of alleged mutilation of collated result sheets at the local government collation centre only to reverse itself and opt for supplementary polls in the area.

Governor Abubakar however got a court injunction restraining INEC from continuing with the collation in Tafawa Balewa local government.

At press time, Mohammed appeared to have increased his votes margin to over 10,000.

Officials of INEC were preparing to commence collation of results in Sokoto at press time.

The State Resident Electoral Commissioner, Sadiq Abubakar Musa said: “we have concluded the election and about to begin collation which will be added to the previous results and winner be declared.

“The declaration will be based on simple majority.

“The Collation/Returning Officer of the governorship election, Professor Fatima Batulli Mukhtar will handle it accordingly.”

He urged parties and candidates to accept the outcome in good faith.

Earlier during the election, some notable party chieftains yesterday engaged in popularity supremacy at Magajin Gari ward ‘B’ Shiyyar Danfarijo polling unit 005 and 009in Sokoto, during the supplementary polls.

This sparked chaos in the Sokoto North local government area of the state.

Police had to use teargas on the crowd and deploy more personnel before normalcy was restored after the election was put on hold for about three hours.
This article for appeared on The Nation Newspaper

We Won’t Present Certificate Of Return To Okorocha, INEC Insists