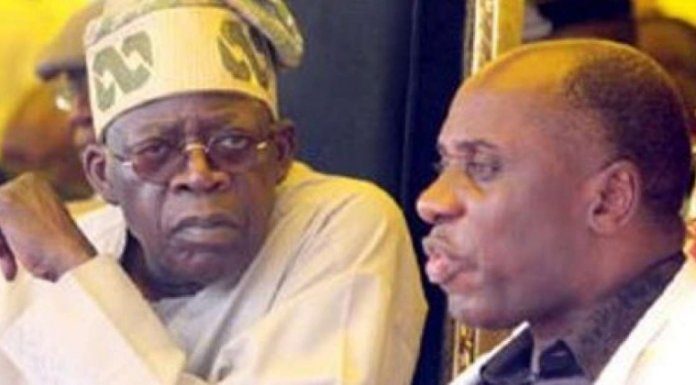 Look at Akpabio who once boasted that “what money cannot do, more money can do”. Today, where has his “more money” gotten him? A man cannot be dancing shakushaku while his people are dancing azonto. As my South-south people will say, it is impossicant.

What could have possessed Akpabio to have allied himself to a man and a party that are considered political lepers by his people? A man that was once so loved after he TRANSFORMED Akwa-Ibom, ended up TRANSFORMING himself from a political MODEL to a political MONSTER.

And what would one say about Rotimi Amaechi? A man who is celebrating as reports surface that the military are killing his people. How can Amaechi defend what the military is doing in Rivers? Even the usually conservative European Union was forced to speak up in defence of Rivers people. Yet Amaechi hails their oppressors. Amaechi, your time is coming. Be patient. The god that failed Rochas and Akpabio will also fail you. If you like pray ten times a day in the direction of Daura, it won’t save you from reaping what you have sown. Your political sins will find you and your potbelly soon and very soon.

This brings me to Bola Tinubu.
What Bola Tinubu did was wrong. Having bullion vans bring cash to your house 48 hours to an election is prima facie evidence of influencing voters using money. If President Buhari really had integrity, the EFCC would have picked up Tinubu by now.

Tinubu even boasted on live television that the bullion vans carried money and that it is nobody’s business. That is not true. It is the business of the EFCC by virtue of the Money Laundering Act of 2011. If the EFCC is not aware of that act, let me remind them.

The Money Laundering Act of 2011 makes it illegal for any individual to make cash payments exceeding Five Million Naira. And provides that every cash transaction over N5,000,000 must be done via a financial institution. Tinubu obviously flouted this law.
By virtue of the Money Laundering Act of 2011, any person found guilty of making or accepting any cash payment above N5,000,000 is liable to imprisonment for a term of not less than 3 years or a fine of N10,000,000 (Ten Million Naira) or both.

If I, Reno Omokri, an opposition critic of the Buhari administration was found to have received bullion vans full of cash 48 hours to an election, I would have been arrested before evening on the same day. Is the Nigerian law a respecter of persons?

Is Tinubu above the law? Just imagine if someone linked to the PDP or Atiku had bullion vans going into their house 48 hours to elections. Would the EFCC have been this quiet? Would Buhari have sat idly by as he is doing for Tinubu?
President Buhari has been celebrating with Tinubu ever since he ‘won’ the election. Is he not aware of #TinubusBullionVans? Does it mean that it is only members of the opposition PDP that are eligible for EFCC’s prosecution?

Reno’s Nuggets
I landed in Iceland on Wednesday March 13, 2019, only to find out that my views on divorce trended on TVC and various other media. It was also the number one Twitter trend in Nigeria, with some saying Christians can embrace divorce other than for adultery. That is unscriptural. By virtue of Matthew 5:32 and Matthew 19:9, adultery is the ONLY grounds for divorce for a believer.

Some people in their attempts to wriggle our from under this say Scripture mentions only fornication. You need to understand that Scripture was not written in English. The KJV in Matthew 5:32 and 19:9 uses formication. Other versions say ‘sexual immorality’.

The New Testament was written in Greek. For instance, when you see the word leprosy in Scripture, it does not only refer to leprosy. All skin diseases were loosely called ‘leprosy’. Similarly, fornication is used to refer generally to sexual immorality.

Both Matthew 5:32 and Matthew 19:9 in KJV say you can only divorce your WIFE on the grounds of ‘fornication’. Fornication simply means ‘sexual relations between people who are not married’. Adultery is only a form of fornication.

Again I repeat, IF and only IF you are a Christian, PHYSICAL and EMOTIONAL abuse are not grounds for divorce. They are grounds for separation. The ONLY ground for divorce for a believer is ADULTERY. There is NO wriggle room.
But even if your wife or husband commits adultery, you DON’T have to divorce them. God HATES divorce. If you can forgive them, forgive them. After all, God has forgiven you of so much. But if you choose to divorce, it is not a sin.

If your wife is a WITCH you can’t divorce her. If your husband is a RITUALIST, you can’t divorce him. Only ADULTERY is ground for divorce. But if they ABANDON you because of your faith, then by virtue of 1 Corinthians 7:15 you are free to remarry.

The lower you squat before jumping, the higher your jump will be. The more time you take to know your partner before marriage, the longer your marriage will be. Most divorces would not have happened if couples knew each other before saying I do.

Society is changing, but the word of God DOES NOT change. So if you are a believer, don’t adjust Scripture to suit your lifestyle. Instead, adjust your lifestyle to suit Scripture. Heaven, Hell, Judgment Day and Eternity are all REAL.
#AdulteryOnlyGroundsForDivorce