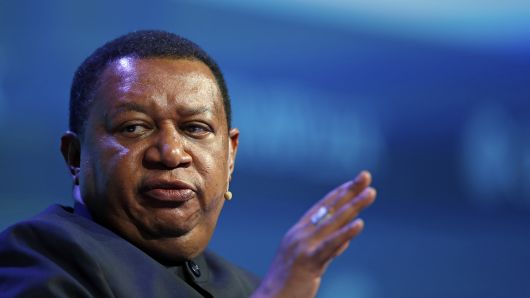 OPEC and its allies do not think their production cuts will drain oversupply in the oil market in the first half of the year.
Canceling an April meeting allows the group to assess the impact of U.S. sanctions on Iran and Venezuela.

OPEC and its allies are aiming to keep 1.2 million barrels a day off the market.

OPEC and other major oil producers on Monday canceled a meeting planned for April, leaving the alliance’s price-boosting production cuts in place until at least June.

The group is delaying its decision because it expects the oil market to remain oversupplied through the first half of the year, Saudi Energy Minister Khalid al-Falih said at a committee meeting in Baku, Azerbaijan. The delay also allows the producers to assess how U.S. sanctions on OPEC-members Iran and Venezuela will affect the oil market in the coming months, several news agencies reported.

The 14-nation OPEC and a group of countries led by Russia launched a second round of production cuts in January after a glut of oil hit the market and crude prices collapsed at the end of 2018. The group began slashing production in 2017 but lifted supply caps last June as oil prices rose toward nearly four-year highs and the U.S. prepared to sanction Iran, then OPEC’s third biggest producer.

When they agreed to the new production cuts in December, the so-called OPEC+ alliance said it would assess the oil market in April, two months ahead of OPEC’s usual meeting in June. But on Monday, a committee tasked with monitoring the deal said “market fundamentals are unlikely to materially change in the next two months.”

The Joint Ministerial Monitoring Committee said it will next meet in May, with the full group convening on June 25 to decide whether to extend the output cuts through the end of 2019.

The latest round of cuts have helped boost oil prices from 18-month lows this year. U.S. West Texas Intermediate crude has rallied 29 percent to more than $58 a barrel, while international benchmark Brent crude is up 25 percent to about $67 a barrel.

OPEC and its allies are aiming to keep 1.2 million barrels per day off the market, but some producers are still pumping above their quotas, including Russia, the world’s second biggest oil producer.

Russian Energy Minister Alexander Novak told CNBC on Sunday that Russia will hit its target in coming weeks. He said it is premature to to discuss whether the group should continue capping output beyond June.

Falih said Monday he does not expect OPEC to leave the oil market “unguided in the second half,” Dow Jones reported. Last month, the Saudi oil minister told CNBC he was leaning toward extending the production cuts through the end of the year.

Helima Croft, global head of commodity strategy at RBC Capital Markets, says the group is likely to continue cutting production throughout 2019. However, extending the cuts will highlight divisions between Russia, where partly private companies produce oil, and OPEC members like Saudi Arabia, where state-owned energy companies underwrite the nation’s budget.

“The Russian corporates hate shutting in production. They benefit from volume. The state takes the upside of higher prices, so for them, they don’t like the agreement,” she told CNBC’s “Worldwide Exchange” on Monday.

“But for Saudi Arabia and for the rest of the OPEC producers, current prices still remain below their fiscal breakevens, so they would like to see prices a bit higher from here.”

The producers also want to see whether the U.S. tightens sanctions on Iran in May, Croft said. In November, the Trump administration surprised OPEC by allowing some of the Islamic Republic’s biggest customers to continue buying limited amounts of Iranian crude oil — just as Saudi Arabia was pumping at record levels.

The sanctions waivers expire in early May.

Last week, the State Department’s special envoy for Iran, Brian Hook, said the administration believes it has room to tighten sanctions on Iran because the oil market is well supplied. Speaking on the sidelines of the CERAWeek by IHS Markit conference in Houston, he declined to comment on whether the administration would telegraph its decision on sanctions waivers to OPEC.

“It makes our job more difficult in focusing on the fundamentals, not to talk of our efforts to maintain balance and more challenging to sustain this balance going forward,” he said during a press conference at CERAWeek.

OPEC+ will have to cut output in December, according to market...