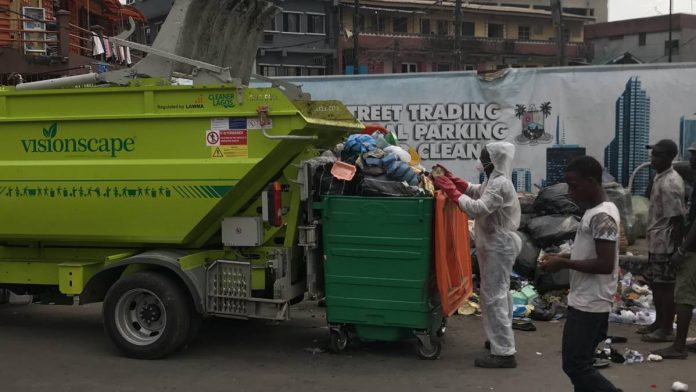 FMDQ OTC Securities Exchange (FMDQ), Nigeria’s latest entrants into the debt capital market may have plunged the market into fresh crisis of investor’s confidence with the default of the terms of a N4.85billion 15.75% Series 1, Tranche B Secured Rate Medium-Term Note due in 2022; which was issued by a private company, Municipality Waste Management Contractors Limited (MWMCL).

In March 2017, the Lagos State government signed an environmental law christened the Cleaner Lagos Initiative (CLI). Visionscape was handed residential waste disposal, a territory that was prior to this run by Private Sector Participants (PSPs).

The State Executive Council in March 2017 passed a resolution to secure the financing structure adopted by Visionscape and its partners to raise up to N50 billion in bonds for the implementation of the CLI through the issuance of an Irrevocable Standing Payment Order (ISPO) as a charge on the State Internally Generated Revenue Account/ Environmental Trust Fund. The company thereafter raised an initial first tranche of its bond issuance, an N27 billion, 17.5% fixed rate, a five-year bond due 2022.

The Offer, with a nominal face value of N1, 000 per unit, opened on February 26, 2018, and closed on February 28, 2018. The Issue price was 100% of par value and promised a coupon of 15.75% or N157.50 per unit. It was oversubscribed by investors, setting an outstanding benchmark for future investments in green infrastructure bonds in Africa.

The top-rated instrument which attracted a credit rating of A+ by both Agusto Credit Agency and Global Credit Rating Agency (GCR, formerly Duff & Phelps) missed its coupon and principal payment due for Tuesday March 5, 2019.

The Note with a four and a half year tenor was meant to pay both coupon and principal to investors in the first week of March 2019 but the poor state of the Note’s sinking fund and the slow response of the state’s treasury to the payment of the fixed income obligation has raised anxiety among the Note’s investors.

Following this development, many analysts have laid the blame at the doorsteps of many industry regulators and players, the question that continues to arise on this transaction is who really should be blamed.

“We are honoured to be recognised by the management & Board of The FMDQ OTC Securities Exchange. Visionscape and its partners aim to be at the forefront of this historical project in Lagos, Nigeria and are proud to be part of the team bringing it to fruition. We will continuously strive to be the industry’s benchmark for social impact investments,” said John Irvine, Visionscape Africa, CEO.

Following increasing criticisms by the bond investors, the apex capital market regulator, the Securities and Exchange Commission has issued a denial. Part of the statement read “The Bond under reference was issued by Municipality Waste Management Contractors Limited, a private company promoted by Visionscape Sanitations Solutions Limited – under a N50billion Medium Term Note Programme.

“Being an issuance by a private company, it was not offered to the public, but to qualified investors by private placement. The transaction was therefore not subject to the prior review and approval of the Commission and does not fall within its regulatory preview. In addition, the Bond was not certified as a Green Bond as portrayed by the media. The Commission wishes to assure the general public that it is committed to its duties of investors protection and ensuring an efficient, fair and transparent capital market,” SEC said.

“As part of its regulatory oversight to safeguard investors in the Nigerian capital market, the Exchange takes steps to satisfy itself that the financial and other advisers have done due diligence on all financial instruments listed on The Exchange in order to ensure that the obligations attached to those instruments are met as and when due”, the NSE stated.

“As part of the requirements for the issuance and the listing of similar debt instruments, The Exchange requires that a Guarantee on the revenue of the State Government is issued, in addition to an approval of the State House of Assembly to back the Notes. The established requirements are necessary to ensure that the risk of default on such instruments when listed on The Exchange is reduced to the barest minimum. Please be assured of The Exchange’s commitment to maintaining a fair, efficient and transparent market that guarantees the protection of investors’ rights,” the Nigerian Stock Exchange stated.

While some analysts believe that SEC should have gone a step further if aware of this bond to have queried FMDQ on its involvement, other schools of thought within Nigeria’s debt capital market blamed the credit rating agencies of Agusto & Co and GCR who awarded the Note an ‘A+’ Rating and an ‘A’ Rating respectively.

Currently, only the investors of this special purpose vehicle investment are left to ponder over their fate in what would have been a good green financing for a cleaner environment.

The reported default by the company, not only increases the risk premium of the state but companies that may wish to enter into similar agreements with state governments.

Visionscape has issued a statement stating that “being an issuance by a private company, it was not offered to the public, but to qualified investors by private placement. The transaction was therefore not subject to the prior review and approval of the commission and does not fall within its regulatory preview.”

The company had in October last year, shut down operations citing heightened political tension in the state and reported cases of attack on its employees, destruction of its operational vehicles and equipment.