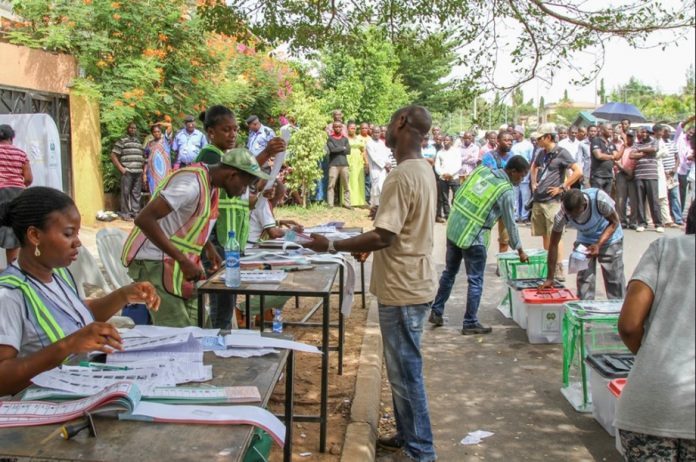 PDP ‘sure of victory’

Adamawa APC: INEC must respond to our concern

A war of words broke out yesterday between the two major political parties ahead of the March 23 supplementary elections to decide who will control power in six states.

The All Progressives Congress (APC) and the Peoples Democratic Party (PDP) were bragging about their capacity to carry the day.

INEC announced the date in a press statement signed by the National Commissioner in charge of Information and Voter Education, Festus Okoye.

INEC noted that it acted in complaince within the ambit of the Electoral Act.

Okoye also noted that in the case of Bauchi State, an investigation team had been set up to look into the matter.

“However, the Returning Officers in Adamawa, Bauchi, Benue. Kano, Plateau and Sokoto states declared the governorship elections inconclusive. Consequently. the Commission will conduct supplementary elections on Saturday 23rd March 2019 to conclude the process. Supplementary elections will also hold in polling units in all states where state Assembly elections were declared inconclusive and winners could not be declared. Details of the constituencies, including number of polling units and registered voters, will be published on our website (tomorrow) Wednesday 13th March, 2019.

“The elections were declared inconclusive for a combination of reasons, mainly the discontinuation of use of the Smart Card Readers midway into the elections or the failure to deploy them, over-voting and widespread disruption in many polling units.

“In compliance with the Margin of Lead Principle derived from Sections 26 and 53 of the Electoral Act, 2010 (as amcndcd) and paragraph 41(e) and 43(b) of the [NEC Regulations and Guidelines for the conduct of elections, the outcome of these elections could not be determined without conducting polls in the affected polling units. Hence, the Commission’s decision to conduct supplementary elections in line with this principle.

“Furthermore, the Commission has considered a Report submitted by the Resident Electoral Commissioner for Bauchi State on the disruption of the collation at the Tafawa Balewa LGA collation centre. which led to the cancellation of results for the entire local government. The Commission found that there are issues that need further investigation and has set up a team led by a National Commissioner to resolve them.”

Here is a report of what the parties are saying:

The APC candidate in Sokoto State, Alhaji Ahmed Aliyu Sokoto, had on Monday accepted in good faith the declaration of the election as inconclusive.

Addressing reporters at the Gawon Nama home of the Chairman of the Northern Senators Forum and Coodinator, Northwest APC Presidential Campaign Council, Senator Aliyu Magatakarda Wamakko, the APC candidate said: “The party, its leaders and supporters are law abiding citizens and, as such, we have accepted the decision by INEC, in good faith.

“The action of the Chief Reurning Officer, who declared the election as inconclusive was in line with the nation’s constitution, as well as the Electoral Act, 2010, as amended.

“The declaration of the elections as inconclusive came at a time when the party was leading and we have won more than the two-thirds majority of the votes, as required by the law.

“Apt and accurate figures in our possession have shown that, I was already coasting to victory, yet, we directed our peaceful and lawful supporters to halt their celebrations.

“We have since directed them to embark on immediate and massive mobilisation of our supporters and the patriotic electorate, in readiness for the forthcoming rerun elections in 136 polling units across 22 local government areas to be conducted by INEC later”, Sokoto added.

“There is no cause for alarm, victory is ours, Insha Sha Allah,” he said.

Governor Waziri Tambuwal and PDP governorship candidate in Sokoto state had on Monday INEC to as a matter of fairness and justice declare him winner of the poll.

According to him the decision by the Returning Officer of INEC, Prof Fatima Mukhtar to declare the exercise inconclusive was unconstitutional.

He cited Section 179(2) of the constitution of the Federal Republic stated that the provision clearly explained how to conduct governorship polls.

“Our party, the PDP has returned the highest number of votes and we have won 2/3 of the local governments in the state and therefore, the decision of INEC is not founded in law. We wonder why INEC is coming with this technical reason to declare the exercise inconclusive.” Tambuwal said.

He told reporters in Government House, Sokoto, that the INEC decision would be put to test in the court, saying: “We have not been given substantial reasons for such decision. INEC should note that it has an image and integrity to protect as an agency and for its officials. It should not put its integrity to public questioning.

“Up till now (Monday), we have not been told why the cancellations of the exercise in 136 polling units across 22 local government areas. We know there are adverse factors that should be considered to warrant such decisions and not in all cases rerun should be conducted.”

On whether he and his party would participate in the supplementary election, the governor said: “Our court action will not stop us from participating. We want to make sure the right thing is done based on constitutional provisions.”

The Chairman of Governor Simon Lalong’s Second Term Campaign Council (Media), Jonathan Ishaku, yesterday said the party and its candidate were ready for the poll.

Ishaku, who spoke on phone with our Jos correspondent, said: “The party had resolved from the moment they declared the election inconclusive that we were going to cooperate with INEC for the re-run.

“Obviously, the re-run is an exercise we need to use to justify the victory of our party at the poll. The people of the state have voted massively for the APC, the results are there.

“So, the re-run is in our interest and we welcome the new date with both arms.”

Also yesterday, the state Publicity Secretary of the PDP, John Akans, said the date fixed by INEC is convenient for the party and its candidate.

Akans said: “The re-run itself is a constitutional provision and, as a law abiding party, we will prepare and mobilise our supporters to come out and vote for our party.”

The APC said the electoral umpire acted within the law in fixing a date for the rerun within 21 days after the main election.

It, however urged INEC to respond to the issues it raised concerning the March 9 election.

The Secretary of the APC in the state, Wafarniyi Theman, who spoke with our reporter on the telephone, stressed that what the party would eventually decide concerning the date for the rerun would be determined by INEC’s response to its petition.

Theman did not specify the issues in APC’s petition. The party addressed the press on Monday evening, rejecting the outcome of the governorship election and demanding a repeat election in places where it said there were over-voting and use of security personnel to intimidate APC agents, among other things.

The PDP also said it had issues with INEC, such as the decision to declare the election inconclusive based on slimness of margin of lead vis-à-vis the number of registered voters in polling units where voting was cancelled rather number of people who collected PVCs.

The party, however, said it was ready for the rerun, irrespective of INEC’s response or lack of it to its objection.

Theman said: “We are ready for the rerun because we have nothing to fear, we are set for victory; this is why we wonder why they should declare the election inconclusive because all the collected PVCs in the units where the rerun has been scheduled cannot upturn the lead we already have.”

According to Hamation, “the APC is going for nothing short of victory.”

In a related development, the Publicity Secretary of the PDP in the state, Bemgba Iortyom, said the ruling party has perfected its strategy ahead of the March 23 poll.

In a press statement, Iortyom said: “The PDP is going into the supplementary election with 81,000 votes advantage and hope to win the election which was delayed.”

We won’t disappoint Nigerians on Ekiti poll, no room for failure,...