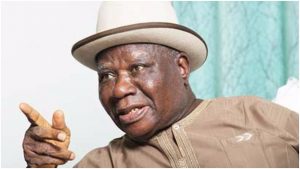 In the unit results announced by INEC officials, Okowa polled 394 votes to defeat Chief Great Ogboru of the All Progressives Congress (APC) who scored 11 votes.

In the build up to the governorship poll, the elder statesman had insisted that Delta North via Okowa be allowed to complete it turn of two terms in accordance with the zoning and rotation arrangement and had endorsed the governor for another term.
ADVERTISEMENT

The breakdown of results in Ngbilebri Ward 8 Unit 7 is as follow: