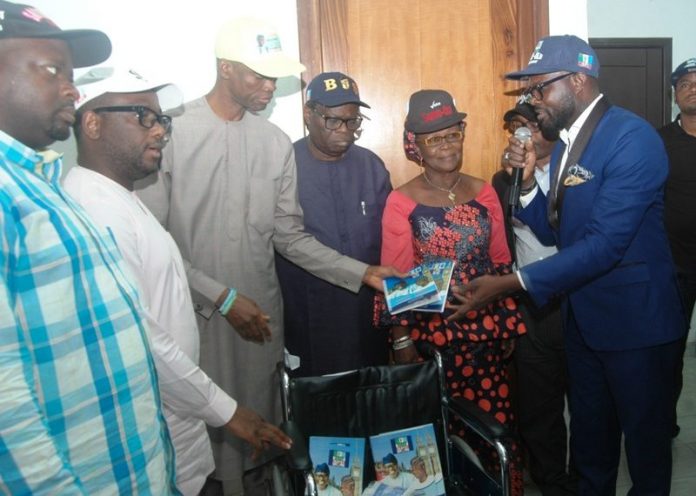 Members of Lagos All Progressives Congress (APC) in the United Kingdom, led by the Chairman, Hon. Tayo Sodeinde in company of the executive and members of the group donated wheel chairs, notepads, exercise books and other materials to the Lagos State Chapter of the APC.
Sodeinde said at the presentation of the materials that they were their own contributions towards the campaign of the Governorship candidate of the APC in Lagos State, Mr. Babajide Olusola Sanwo-Olu and his Deputy, Dr. Kadiri Obafemi Hamzat, which they said they believed would be used to facilitate the campaign.
The presentation was made to the Chairman of the APC in Lagos State, Mr. Tunde Balogun.
“Lagos APC in the UK has always played a vital and active role in every election that took place in the state.
“We were here during the last election and we were warmly received by the former Chairman of the APC in Lagos State, Chief Henry Ajomale.
“It’s normal that since you have come in, we have a renewed hope in your being at the helms of affairs of APC in Lagos State. We are hopeful that our candidate would be victorious, and there would be reward for those who participate actively in the process.
“We have brought some wheel chairs to enable the physically challenged members of the party move around. We also brought exercise books for the children for their education, and notepads with handkerchiefs.
“We are sing this medium to congratulate you for your brilliant performance within a short period of your being in office,” Sodeinde said.
The team also thanked the National Leader of the APC, Asiwaju Bola Ahmed Tinubu, who they said has been the pillar of support of the party.
They also commended Chief Ajomale, who they said had helped the party to where it is now.
In his reaction, Chief Tunde Balogun said that he was excited to receive the team in his office.
“I would say you have shown great passion and service to this party and each time you are here, you have never come with an empty hand.
“Thank you for alleviating the suffering of the physically challenged among the members of the party.
“APC is full of thinkers and doers, we have all the indices of development in our programmes, therefore, we must develop our country.
“That’s why we want to continue with a progressive government, that’s why we are consolidating in moving to the next level.
“Lots of infrastructural that could bring about development have been embarked upon by the President Muhammadu Buhari-led government,” Balogun said.
He added that he assumed office, when the congresses of the party were about to hold with little or no experience, but that God had helped him to steady the ship of the party ever since.
The group also paid a courtesy visit to Sanwo-Olu Independence Campaign Group in Ikeja, GRA, where some items were officially handed over to the Director General of the Campaign, Mr. Tayo Ayinde, who warmly welcomed the team home.
He appreciated them for coming to Nigeria, saying that when he and others went to the UK, they talked to the group about the programmes of Mr. Babajide Sanwo-Olu for the people of Lagos State.
“We thank you for committing your resources and time, you have shown to us that you are loyal to the party.
“You are so much interested in the person who governs us in Lagos State and Nigeria at large. Therefore, your being here personally has shown to us that you are passionate about the project called Nigeria,” he said.