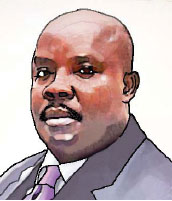 Uncertain developments in the country, in the last couple of days, have forced me to reflect on the book I read almost 40 years ago. Titled; State of Blood: The Inside Story of Idi Amin, the book, was written by Henry Kyemba, a Ugandan politician and public servant. It was published in 1977. Kyemba, for a brief introduction, was for six years, Principal Private Secretary to the late Ugandan Military Head of State, Idi Amin. He was later to become the country’s Health Minister.

But the book, something akin to a memoir, is a revelation of needless violence and accompanying river of blood that flowed in Uganda, for Amin to remain in power. The inside information relayed by the book, is quite appalling, hence it is not recommended for the faint-hearted. The author’s brother, was in fact, one of the victims of Amin’s killer machine. I understand that The State of Blood, more than 40 years of its publication, ranks among the most chilling accounts on how the inordinate ambition to acquire and hold on to power could lead a leader into wasting other people’s life. The author, at a time, could not withstand the regular ritual of bloodletting in the country. He fled.

As I write, Nigeria, is gradually but steadily drifting into the valley of blood. Any news belt on national televisions or edition of the newspapers these days without chilling reports of Nigerians killed in one part of the country or another, would seem incomplete to viewers and readers. In the Journalism School, the maxim is, ‘when it bleeds, it leads’. This is on the understanding that the loss of a single soul in an unusual circumstance, overrides any other news item of the day, hence it should be on the front burner. But now, and sadly, on account of the rapidity and volume of death the country harvests on daily basis, certain figures are no longer deemed enough to attract headlines.

In Kaduna for instance, there are still conflicting figures on the casualties of the recent crisis in Kajuru council, in the southern zone of the State. While official estimates put the number at 25, sources say the toll is over 40. In Rivers State, the number of people killed before or since the February 23 presidential election, is variously put at between 12 and 25. Lagos state also had its share of violence during the exercise. Over all, the death toll arising from the presidential election across the country on account of violence, is still a matter of debate. Behind the crisis, attacks and deaths, is the vaulting ambition by politicians to gain power and control the resources of state, of course, not for service but for their own interest. In the process, seeds of disharmony are being sowed among indigenes and residents who had lived together and borne the trauma of bad governance inflicted on them, over the years.

This is the current situation in Lagos, the famed Centre of Excellence. Following the slim margin between the ruling All Progressives Congress (APC) and the rival Peoples Democratic Party (PDP) in the presidential election and apparently apprehensive of the outcome of the State elections of Saturday, March 9, leading politicians in the state, have gone to work. And they seem to be having their way.

Of course, the easy and surest way of attaining immediate success is touching on an area that easily flames passion – ownership of Lagos! Suddenly such refrains as ‘Lagos is no man’s Land’, which has not been particularly attributed to anyone, began to be smuggled into the state’s political discourse. Expectedly, the aborigines and kinsmen have been at war with a section of non-indigenes that have been derisively dubbed land grabbers and usurpers. In such situation, reason readily takes flight; years of friendship and professional felicities, are being cast aside. It becomes a matter of ‘us and them’, as friends become enemies, overnight.

While it lasts, the foot soldiers do not ask basic and salient questions. They forget for instance, that as the respected Professor Wole Soyinka, once remarked, a ‘Tiger does not brandish its Tigritude’. Every land has an owner. They are also lost in the euphoria of winning the attention of the paymasters. It does not also occur to them that the decrepit social infrastructures that dot every corner of the state and the country at large, do not discriminate between the natives and strangers in taking their toll. They fail to realise that both the indigene and non-indigene are all bearing the brunt of the economy that has been mismanaged by the political elite they are dying for. It does not also matter to them that what is actually playing out is mere class conflict that the tension mongers will talk over, over a cup of coffee, at a convenient time.

Perhaps, reason may return later. But that will be after the Saturday election. That will be after the blood of the poor and uninformed would have been shed to water the business interests of the paymasters. Thereafter, life goes and the dead is left to bury their own dead.

Curiously, while the drumbeat of ethnic tension resonates, not much is done by the agents of State to reduce the trend. Some are even accused of looking the other way or conniving with interested parties in the sordid development. And the country further slides into a State of Blood.

Op-Ed: Why the quest for a single currency for West Africa...