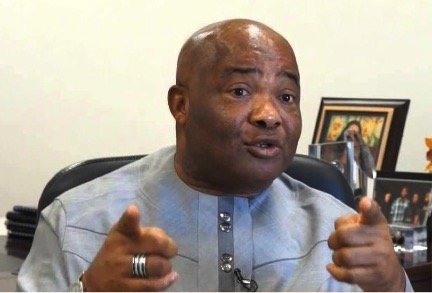 OWERRI—AHEAD this Saturday governorship election in the country, the governorship candidate of the All Progressives Congress, APC, in Imo State, Senator Hope Uzodinma has appealed to security agents to ensure that the votes of Imo people counts, alleging that governor Rochas Okorocha has perfected plans to unleash mayhem on APC members during the exercise. Okorocha and Uzodinma According to him, “the governor has imported thugs across the 27 Local Government Areas of the state while he has also armed members of the Imo State Security out fit.

He has been spending the resources of the state to rig in his son in-law Uche Nwosu, wasting the resources of Imo people due to his selfish desire to plant his son-law as governor. Uzodinma stated this when 53 different groups including the Kowa Party, Market women across the 27 Local Government areas of the state endorsed him for governor. He said: “ While we have been busy campaigning across the nook and cranny of the state, Okorocha who is now suffering from gonorrhea of the mouth is threatening every body that he will use thugs to chase us away.

That he will not allow our people to come and vote because they will vote against Uche Nwosu. “I am proud that I delivered my polling unit, ward and Local Government to President Buhari. But Rochas son in-law Uche Nwosu who boasted that himself and his boss will give the President one million votes lost his unit, ward and Local Government to PDP. “His boss Okorocha was battling to win senatorial election and you saw howit went. He is also planning to rig again but we are waiting for him. And I am glad that people are joining us without conditions.

The election of Saturday is between Imo people and Rochas Okorocha. APC is the ruling party and we must retain the state for the party. “Okorocha should stop using the money of Imo people to blackmail them. He should use the money to pay salaries, pensioners and build hospitals. The governor is busy camping thugs every where but I can tell you one with God is majority. But on Saturday he will know that Imo people are ready. Okorocha’s senate: INEC asks to monitor officials “You cannot continue to fool people.

The violence sponsored by the governor will never happen again. He claimed he was suporting Buhari but in the field his boys were destroying APC votes and he claimed he is supporting the President. He is a deciet but we will expose him” he declared. Continuing he said, “we are begging Okorocha to allow the people of Imo to select who will be their governor.

I urge security agencies to cut the excesses of the governor else he will throw this state into chaos due to his ambition because we will not fold our arms and allow Okorocha steal our votes. “When a governor starts acting like a rascal it is going to create crisis. We are ready to cast our votes and we are not afraid of any body. We urge security agencies to be alert.

We are not worried because I am going to win. We are glad that we have Federal Government forces that willl provide security, so Okorocha’s thugs cannot be stronger than our security agencies. So our people should go out amd cast their votes and we will protect the votes” he declared.

I am not behind Uzodinma’s travails – Okorocha insists