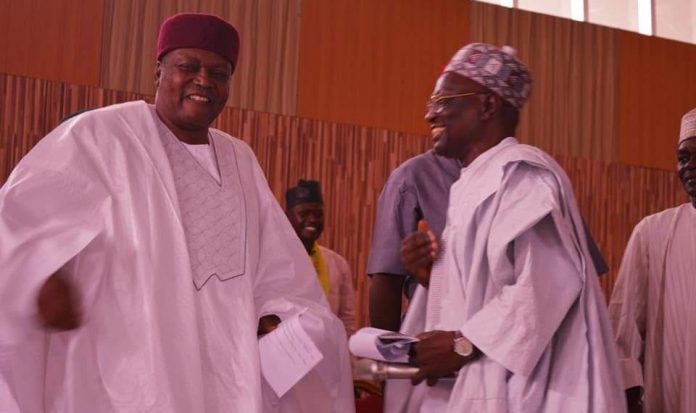 The governorship candidates of 16 political parties on Tuesday stepped down their governorship ambitions to support and work for the success of Governor Darius Ishaku of Taraba State in Saturday’s governorship and state Assembly elections in the state.

The leader of the group, Mr Paul Yanji, who spoke on behalf of the other candidates said that the decision was carefully taken after a thorough evaluation of the political atmosphere and a close examination of the governor’s achievements in the last four years.

Yanji said that the governor had brought a principled and ideological system of governance in the state for the first time and it was only natural for well-meaning people of the state to support him for a second tenure so that he could complete the good work he has started.

“We are here to express our unalloyed support for Gov Darius Ishaku to continue in 2019. Our decision is well informed and based on a dispassionate love for the state which we collectively consider above our personal interests.

“For the first time, the governor has introduced a principled and ideological system of governance in the state through the rescue mission. His willingness to always make compromises just to accommodate everyone has endeared him to the people.

“This is a period of political turbulence but we believe that you cannot be distracted by the wave of distraction around you. You are focused and since our dear state needs a very focused leader now, we have chosen to throw our weight behind you completely.”

In his response, Gov Ishaku described the gesture as truly heart-warming and humbling. He said he was speechless and humbled by the gesture.

“This is a moment I will truly cherish.
If democracy is to survive, the political class must face the fact that they need to do what makes them popular with the people rather than waiting to take over power by force. This politics of violence is unacceptable and those truncating democracy are inviting chaos and anarchy.

“Your sense of coming together in unity and aligning your interests is a mark of unity that is needed to move the state forward. I am now sure that with this coalition, we are going to win the election on Saturday and I am spurred to do a lot more in my next tenure with this kind gesture.”

Earlier, the Coalition of United Political Parties CUPP in Taraba State had threatened to resist any attempt to interfere with or manipulate the Saturday’s governorship and state Assembly elections in the state the by the authorities.

The secretary of the group, Mr Charles Buki, who read the text commended the electorate for conducting themselves well during the presidential election and urged the people to think peace and go out in good numbers to participate in the next election and to make sure that their votes truly count.

Buki urged the “Independent National Electoral Commission (INEC) and the security agencies to provide a level playing field for all political parties to participate in the election as an attempt to manipulate the results or the process of the election will be inviting anarchy and chaos.” DailySUn

Abiola June 12: Buhari desperately seeking to garner votes ahead of...