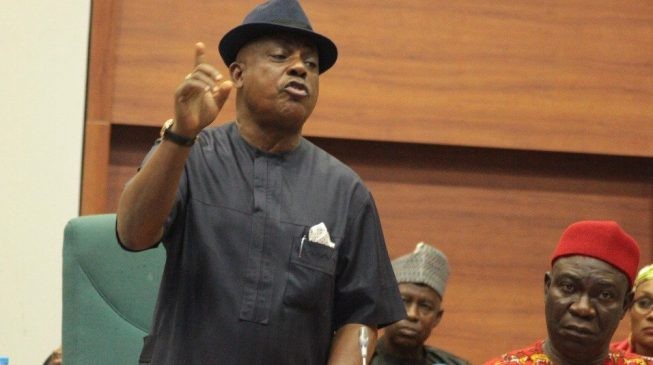 Protesters on Tuesday marched from the Atiku Abubakar’s campaign headquarters in Maitama to the office of election regulator INEC to allege plans to rig this Saturday’s governorship elections.

Some 29 states are set to go to the polls to elect governors this weekend.

PDP national chairman Uche Secondus led the protesters, alleging that the ruling APC and some compromised staff of INEC were working assiduously to rig elections in the PD- controlled states of Akwa Ibom, Kaduna, Kwara, Rivers, Sokoto and Delta.

He described the connivance between APC and INEC as “piling gunpowder which when it explodes may leave the country in ruin.”

“The mood in the country shows clearly that you INEC declared the wrong person winner in the presidential election and I urge you to watch your action because history is recording all you do for posterity.

“The APC is deploying military operatives to help some of your black legs manipulate Saturday’s elections in some states particularly Kaduna, Delta, Sokoto, Akwa Ibom, Rivers and Kwara but Nigerians in those states have mobilized to defend their votes,” Secondus said.

The PDP boss submitted a letter of protest to the commission expressing the party’s grievances especially as it relates to the February 23 polls.

Three INEC National Commissioners led by May Agbamuche, received the PDP leaders and assured that the commission would look into the party’s complaints.

The protesters were chanting songs, saying, “Yakubu declare Atiku winner of presidential election,” “we want original result,” “Yakubu, there is God,” “Yakubu, shame on you,” among others.