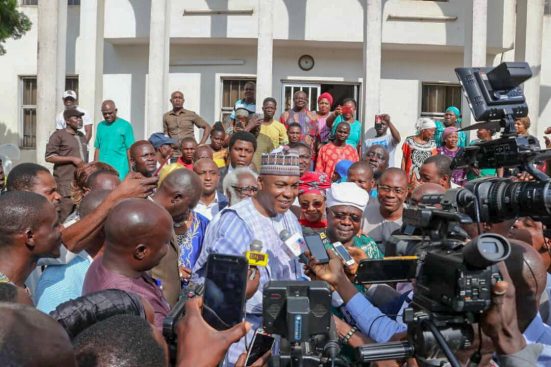 Senate President Bukola Saraki, has urged his supporters not to be discouraged by the outcome of the presidential and National assembly elections in the state, but should troop out to vote for the People’s Democratic Party (PDP) governorship and house of assembly candidates come March 9 elections.

A crowd of supporters and wellwishers met his arrival at the Ilorin International Airport.

Addressing them at his residence, he appealed to them to overlook wherever the system might have erred in the overall interest of Kwara state.

“Those you voted for in anger are not your people and cannot attend to your needs as we, who are your brothers will do,” he said.
ADVERTISEMENT

“I can’t run away. My covenant with my people transcends politics. I will never abandon my people. We should not fight. I leave everything to God. I will not fight even with those they declared winners of the last weekend’s elections. We must cooperate for the governorship election. Once we do this, we shall win the election.”

Joining APC was the worst mistake, I made in my political...