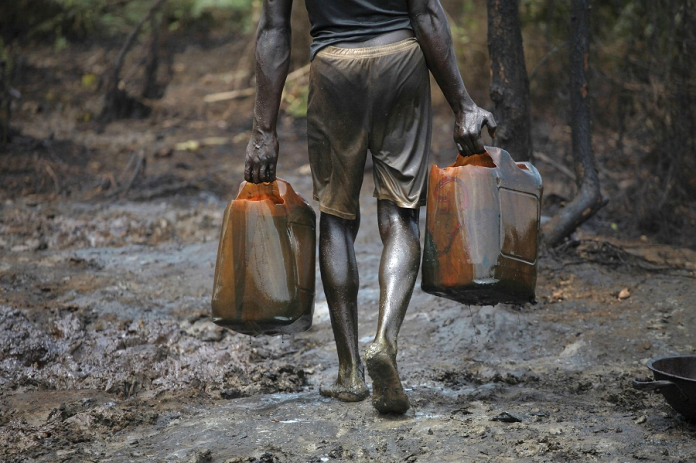 Nigeria’s oil and gas sector contributes 92.9 per cent of the total amount of illicit financial flows (IFFs) the country records yearly through companies and persons operating in the sector, a report prepared by experts in the Nigeria Extractive Industries Transparency Initiative (NEITI) and Trust Africa has said.

Nigeria is said to be losing between $15 to $18 billion every year to IFFs.

The report titled: “Averting Illicit Financial Flows in Nigeria’s Extractive Industry”, which was presented in Abuja Wednesday, revealed that while it is generally difficult to measure IFFs as a result of their illegality, types of activities, and data challenges, available records show that Nigeria’s oil and gas sector contributes the most to the illegality.

It explained that out of the 92.9 per cent contribution of the sector to IFFs in Nigeria, oil bunkering accounted for about 35 per cent, while commercial transactions by multinationals which dominate the sector contribute more than 60 per cent.

These multinationals, the report added, often resort to tax evasion; money laundering; and transfer pricing in their practice of IFFs, adding

that Nigeria’s oil industry has remained vulnerable to the thriving practice of IFFs because the country itself depends on the sector to survive economically.

The sector, it added, is equally highly influenced and controlled by the political class; as well as technically and structurally complex, pointing to Nigeria’s reliance on cash-based economy as another reason why IFFs thrive in the country.

While referring to another report published by the High Level Panel (HLP) of the African Union Commission and United Nations Economic Commission for Africa (AUC/ECA) in 2015, the IFFs report on Nigeria’s extractive sectors stated that Nigeria accounted for 30.5 per cent of all IFFs outflows from Africa, which is $217.7 billion, between 1970 and 2008.

It stated that opportunities for IFFs through fraud and money laundering in Nigeria’s oil industry generally starts as administrative control failures by those expected to exercise statutory and regulatory frameworks in the industry.

On how to check the practice, the report indicated that mitigating the risks of criminal activities, increasing scrutiny and accountability of processes, promoting effective demand-side accountability platforms, getting signed on to channels and platforms that discourage trading in illegally exploited minerals, enforcing laws and taxation instruments, as well as automating service delivery processes, would go a long way in cutting down IFFs practices.

Speaking on the import of the report, the Executive Secretary of NEITI, Mr. Waziri Adio, stated that the level of IFFs in Nigeria meant the country needed to move from asking how much it was paid or not, to how the payments are made to it.

Adio said: “Everybody is talking about illicit financial flow. It is one of the buzzwords now, and there are all kinds of reports out there about how countries are bleeding from this. There is a report published by One Campaign in 2014 about how developing countries lose about $1 trillion annually from this, and you can imagine what that would do for these countries.

“But, it is not just about talking about these studies and the figures but how these illicit flows are actually depriving countries of their resources. Some of these reports have also focused on Nigeria and when you look at the latest estimate from the Thabo Mbeki-led HLP, Africa loses about $50 to $60 billion every year to IFFs and it is estimated that Nigeria accounts for 30 per cent of that loss, that means Nigeria is losing between $15 to $18 billion every year to IFFs and that is not a small amount of money.

“We have done a lot of work at NEITI in focusing on financial transparency, and these are very important piece of works, but you know, it is also very important that we go beyond focusing on how much companies pay, we should also be looking at if that is how much they should pay because that is where Illicit financial flows come in.”