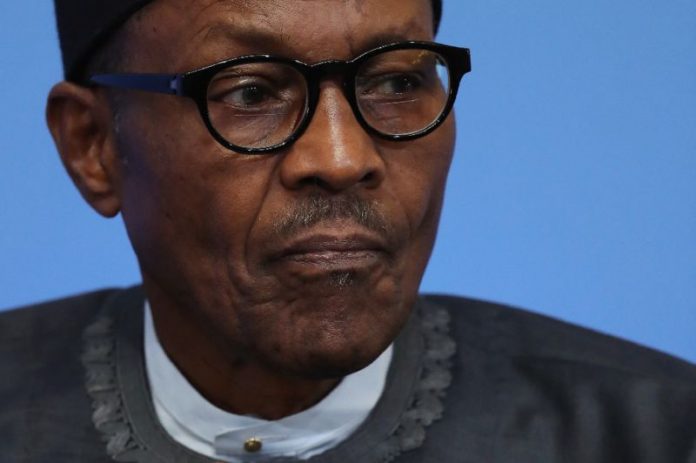 All Progressives Congress (APC) party supporters rally as they celebrate the re-election of Buhari. Photographer: Luis Tato/AFP via Getty Images

The legal challenge to last weekend’s vote promised by his main rival, Atiku Abubakar, is the least of his worries. Add to that a listless economy, Islamic State wreaking havoc in the northeast and an explosive cocktail of worsening poverty and rapid population growth.

The 76-year-old former general came to power in 2015 on a wave of optimism after becoming Nigeria’s first opposition leader to win at the ballot box, with promises of fighting endemic corruption and ending the economy’s addiction to oil. So far, progress has been slow.

“President Buhari can expect an even briefer honeymoon than he did in 2015,” said Matthew Page, a former U.S. State Department specialist on Nigeria, who’s based in Cambridge, U.K. “Unless Buhari experiences an epiphany and adopts a more dynamic, reform-minded, and business-friendly strategy, we can expect Nigeria’s socioeconomic situation to stagnate during his second term.”

In his first four years, Buhari was a strong proponent of a statist economy. He called on the central bank not to let the naira weaken and made clear he disagreed with the pledges of multimillionaire Abubakar to privatize inefficient and loss-making oil refineries and the Nigerian National Petroleum Corp., which dominates the local energy industry.

Nigeria’s Vote: the Numbers, the Surprises, the Market Reaction

His administration’s drive to clean up business practices brought him into conflict with some foreign companies. South Africa’s MTN Group Ltd. is fighting claims that it owes $2 billion of backdated taxes, which have dragged its shares down. And the government is suing firms including JP Morgan Chase & Co. and Royal Dutch Shell Plc in Europe for what it says was a corrupt oil deal in 2011. All companies deny the allegations.

Oil Production Boost
There are reasons for optimism. The OPEC member made its first shipments this month from the massive Egina offshore oil field, which will boost its production 10 percent to around 2.2 million barrels a day. And billionaire Aliko Dangote says he’ll complete an oil refinery near Lagos, the commercial capital, in the next two years that could drastically cut the nation’s import bill for fuel.

“Nigeria offers vast opportunities, and a lot of low hanging fruit,” said Mathias Althof, a money manager in Stockholm at Tundra Fonder AB, which is bullish on banking stocks. “People have quite low expectations of Buhari since the first four years lacked major reforms. Hopefully, he has saved them for the coming four years.”

Huge difficulties remain, and the economy’s yet to recover fully from a 2014 crash in crude prices. Economic growth accelerated to 1.9 percent last year, the fastest since Buhari took office, but it’s still far below the average of 7.4 percent in first 15 years of this century.

Unemployment has soared to 23 percent and rising debts are curbing the government’s ability to spend money on infrastructure. Interest payments are projected by the International Monetary Fund to soak up more than 80 percent of the federal government’s revenue by 2022.

Nigeria’s per capita GDP has plummeted since 2014

The stock market has dropped 2.8 percent since Monday, as it became clear Buhari would win. It’s been the world’s worst performer since he was inaugurated in May 2015, losing almost half its value in dollars.

Security challenges have also proliferated. While Buhari succeeded in eroding territorial gains made by Boko Haram militants in the northeast, since December they and a breakaway group affiliated to Islamic State have ramped up attacks in the state of Borno.

Separate clashes between farmers and herders over grazing land led to around 2,000 deaths last year, mainly in central parts of the country, according to Amnesty International, while a spate of kidnapping and raids has displaced thousands of people in the northwestern state of Zamfara.

relates to Buhari Has No Time to Celebrate Victory as Nigerian Woes Mount
The Dalori camp for displaced people in Maiduguri, Borno state.Photographer: Paul Wallace/Bloomberg
During his first term, Buhari could point to the failures of Abubakar’s People’s Democratic Party, which ruled Nigeria for 16 years after the return of civilian rule in 1999. It did little to improve security or fix roads and railways, while graft was widespread.

“This time, he will not have the bogeyman of the last administration to blame,” said Tunde Leye, an analyst at Lagos-based SBM Intelligence.

The president must also deal with the fallout from the election, which although more peaceful than some votes in the past, saw at least 39 people lose their lives. While the U.S. congratulated Buhari on his win and the U.K. said “the Nigerian people can have confidence in the result,” the opposition claimed the 56 percent to 41 percent margin of victory was due to massive rigging.

“It’s one of the most disputed elections in Nigeria’s history and has further widened divisions,” said Idayat Hassan, director at the Centre for Democracy and Development in Abuja, the capital.

“Somehow, when it comes to the point of all hell breaking loose,” Petroleum Minister Emmanuel Kachikwu said in an interview Thursday, “Nigerians calm down.”

— With assistance by Ruth Olurounbi, Tope Alake, and Paul Burkhardt