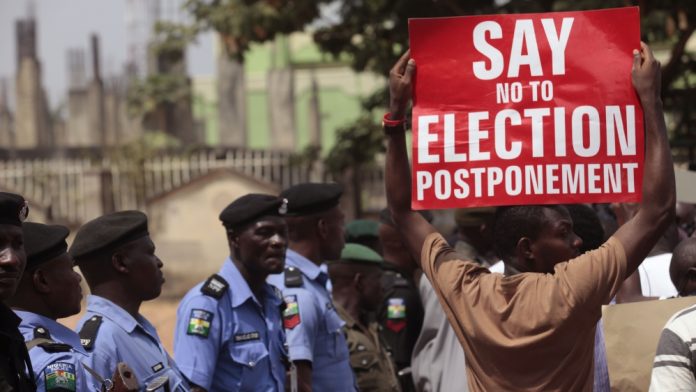 The Olowu of Owu-Kuta appealed to every Nigerian irrespective of religious, political and ethnic leanings to support the military in the fight against insurgency, in order for the strides made in the war to be visible to all.

“As I have said before now, our troops need our individual and concerted support through prayers and positive comments. A situation whereby their efforts are greeted with scornful remarks would naturally kill their morale and also incapacitate their spirit to fight and get desired results,” he said.

Makama also warned Nigerians to be wary of external forces who masquerade as human rights organizations but are agents of destabilization while he challenged the Independent National Electoral Commission (INEC) to be fair in their conduct of the forthcoming general elections.

Buhari campaigned vigorously under APC, climbed on the mantra of “change” to win the nation’s 2015 presidential election, where the then-incumbent president, Goodluck Ebele Jonathan of PDP, conceded power to him to ensure peace reigned supreme in the country. Even international media outlets unanimously quoted Jonathan then when he said: “My ambition is not worth the blood of any Nigerian.”

The military-turned-civilian president certainly feels that Nigerians can easily be taken for a false ride, as he launched the Muhammadu Buhari presidential campaign organization with the mantra: “I will take Nigeria to the next level” in preparation for the 2019 election period. Throwing his hat-in-the-ring Atiku launched “I will get Nigeria working again.” Even though there were over 50 political parties, it became clear to everyone that the real contest for Nigeria 2019 president squares on the shoulder of these two septuagenarian, meaning any youth hoping to run as Nigeria’s president should bury the dream.

Nigerians react to Buhari and Atiku…

But Shola Adedipe, an undergraduate of University of Lagos studying mass communication was different in his remark, “President Buhari is trying on his own, only that he is surrounded by cabal, Shylock politicians and sharks that want to see him fail. We were all waiting for him to probe all those corrupt politicians in APC if he is truly a non-corrupt leader. He shielded all of them from prosecution. I will still vote for APC because I believe in Buhari’s ideology.”

Christopher Chike, a painter was furious and angry: “How can you come to equity and your hands are not clean? Buhari has succeeded in deceiving Nigerians since 2015. Our eyes are now opened. He can no longer deceive us, the masses are voting him and APC out. Even if Atiku of PDP is a Judas, Lucifer, Nigeria want him now to come and rescue the nation in the 2019 election.”

In other interviews this reporter conducted with a few Nigerians here in the United States, and in the United Kingdom, choices were divided between Buhari and Atiku. Iyiola Opeolu, a Nigerian undergraduate in Washington State University said: “It is a shame I call myself a Nigerian here in America, even though I am a Nigerian-American. Our leaders have ruined our nation. They have turned Nigeria into a laughing stock. What is Buhari still doing in power? Nigerians should vote him out. He is undeserving of re-election.”

Halim Nureni, a Nigerian-American pharmacist working in a Super Wal-Mart in Arlington, Texas noted, “I will only say let’s all try and give Buhari the benefit of the doubt, vote for him in 2019 election and see if he will prosecute all the thieves around him.”

Members of the international community are in panic mode in noting the various campaign methods, election-statistics and violence-prone areas in the country. If Buhari wins the 2019 election, feelers are that Atiku will accept the defeat but may later pursue a legal court challenge if the PDP notices or has enough evidence of voting fraud allegedly committed by APC.

But if the reaction by Buhari’s supporters that greeted the 2019 election is anything to go by, if Atiku wins the 2019 election, there are fears that Buhari may out rightly reject the outcome of the election even before the release of the final result collation, which may trigger lawlessness, crisis and un-ending violence. The world will be waiting for the members of international community to back up their promises against anyone that causes or stirs violence in Nigeria’s 2019 election.

Why Atiku selected me as his running mate – Peter Obi