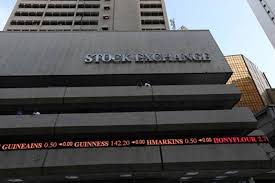 The Nigerian Stock Exchange (NSE) market indices rebounded by 0.67 per cent on Tuesday after reacting to polls shift.

Presco recorded the highest price gain to lead the gainers’ table, gaining N2.40 to close at N75 per share.

On the other hand, Mobil recorded the highest loss, dropping by N1.80 to close at N168.20 per share.

Transcorp was the most active stock during the day, exchanging 120.22 million shares worth N168.21 million.