As Osun State Governor Gboyega Oyetola resumed official duty on Thursday, he has called on public servants to partner him in governing the state.

At an interactive session at the Exco Chamber of the Governor’s Office, Abere, Osogbo with the senior civil servants, including the permanent secretaries, directors, executive secretaries and general managers of parastatals, Oyetola, who was in company of his deputy, Gboyega Alabi, the Head of Service, Dr. Gboyega Oyebade Olowogboyega, enjoined the civil servants to work with him to serve the people of the state.

Thanking them for their support during the last governorship, he said the victory is dedicated to the civil servants and the people of the state.

Oyetola, who assured the public servants that their welfare will be given a priority, advised them not to dichotomy the civil service and the government, saying “I want your advice at all times and my doors are open to welcome ideas because I won’t claim to know it all.”

However, the governor warned that civil servants should rededicate themselves to duty and ensure they are productive.

He said: “I thanked you for your support during our last governorship election. I dedicate the victory to all of you and the people of the state. Your welfare is very important to me. So be assured that your welfare will be given a priority at all times.

“I don’t want you to dichotomy the civil servant and govt. I welcome useful advise from you. My doors are open and I don’t claim to know it all. Let’s work together. Our aim is that Osun must continue to be great. We are partners, so let’s operate so.

“We won’t have anyone problem when together we can understand the objective and your humble role is to ensure productivity. Let us rededicate ourselves to the service of the people. Let your conscience guide you in whatever you do. Let us redouble our productivities.

Read Also: Oyetola states plan to sustain hope
“I must commend you. In my interaction with someone of you, I can see the depth and I could see your contribution to the state. I am very proud of you. Let run the government together and also let’s show level of understanding.

“I will be committed to regular payment of salaries. But you must raise the revenue. There is no magic about it. Don’t make it look that it is the responsibility of government alone to do this. We can generate up to N8 billion. Solution to lack of fund is to increase our IGR.

“We can’t continue to depend on federal allocation. We must look inward. In the time of Chief Obafemi Awolowo, the old Western region depended on revenue. Awolowo achieved so much with the revenue his government generated internally. So we are going to take an advantage of being an agrarian state. So, I welcome useful ideas from everybody.

“Again we can engage our youths through mining. We are going to regulate this. We will look for foreign investors. In tourism, we will turn around the state through this sector. We will be creative in this area.”

Oyetola disclosed that he would organize an economic summit in the first quarter of next year,,saying he would bring experts around the world come and participate in the programme.

According to him, he would harness all available resources to make the state develop.

Praising the immediate past administration led by Mr. Rauf Aregbesola for “monumental achievements” in road infrastructure, education, health among others, he promised to make primary health care work and to make quality medical care assessable to everyone, especially those in the rural areas.

He continued: “We want to see you as our partner. So, rededicate yourself to work and don’t see salary as a meal ticket. From now on it is going to be a collective responsibility. And I am going to play my part by looking after your welfare and you must reciprocate by being productive. To run the government, we need a minimum of N5 billion monthly but our allocation is only over a billion.

“This is the more reason why we need to improve our IGR. So, I am appealing to you rededicate yourself to duty. Let’s play down bureaucracy. Let us play it down. Let’s have target. Bureaucracy is good but we can play it down. With right attitude and will power there is nothing we can not achieve. Once we are determined we will get there.”

Earlier, the the Head of Service, Dr. Olowogboyega, who acknowledged past positive roles of his colleagues in supporting government policies and programmes, assured the new governor of continued cooperation.

Many of the senior civil servants that spoke praised the new governor for encouraging inclusive and participatory governance.

They spoke openly about their peculiar needs, making suggestions about things could be done better, praying for success of the Oyetola administration. 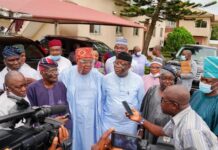 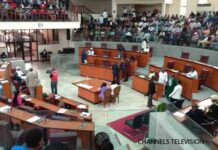