The fate of the Governor of Lagos State, Akinwunmi Ambode, still hung in the balance on Friday as he failed to secure the nod of a national leader of the All Progressives Congress, Asiwaju Bola Tinubu, for his second term bid in 2019.

Tinubu, it was learnt on Friday, refused to intervene in the intra-party crisis that has pitted Ambode against the leadership of the party in the state and members of the Conference 57. Conference 57 is a forum of all the council chairmen in the state.

It was gathered that discussion among members of the Mandate Movement of the state APC, headed by Tinubu, did not yield any result that favoured the incumbent governor.

The party leaders are insisting that Ambode should not be given a second term ticket because he had neglected party members since he was inaugurated in 2015. The leadership of the Mandate Movement, it was learnt, insisted that they would prefer Olajide Sanwo-Olu as the candidate of the party for the 2019 governorship election.

Sources close to the leadership said the group had rejected all interventions made by Ambode and his supporters to convince the Mandate Movement.

The leadership of the Mandate Movement of the APC decides who gets what in the state.

To give a fillip to their support for Sanwo-Olu, they attended a press conference the governorship aspirant addressed in Lagos on Friday.

Shouts of ‘in-coming governor’ rent the air as Sanwo-Olu arrived the venue in a convoy at 3:11pm.

After this, Sanwo-Olu while addressing the press said Tinubu would not force him or any member willing to contest governorship to jettison the idea.

Describing Tinubu as a democrat, the aspirant said the former Lagos governor was always eager to deepen democratic values and allow democracy to rule and thrive.

Asked what he would do if Tinubu urged him to drop his governorship ambition, Sanwo-Olu said, “Sometimes, people will say this man (Tinubu) is imposing people and that he is not allowing aspirants to come out and that there is no internal democracy in the party.

But this man (Tinubu) is a democrat. He allows democracy to rule and thrive. My aspiration has nothing to do with an individual. My national leader is my national leader. He is our national leader and his passion is about Nigeria and not Lagos alone. The movement we have started believes in participatory democracy and so, there is no basis for it (for Tinubu to urge him to drop his ambition).

“He (Tinubu), being a democrat, will allow the process to go on without any rancour. On September 25, by the grace of God, the entire Lagos APC delegates (members) will vote for Babajide Sanwo-Olu as the governorship candidate to represent them in the 2019 general elections.’’

He noted that his resolve to proceed with his vision for Lagos motivated him to take the nomination and expression of interest forms, saying he had been blessed by God for over 30 years after he left the university.

Though none of the members of the movement spoke with the press at the event, sources close to the leadership said they would rather prefer their candidate to lose at the primary than allowing “Ambode to be imposed on us.”

The source said, “We must go for the direct primary. Sanwo-Olu is the person we want, Ambode must go.”

But a source close to the governor said the issue would be resolved and Ambode would be given the ticket.

But effort to get the reaction of Tinubu failed. His spokesperson, Mr. Tunde Rahman, said he was in Osogbo and was not ready to comment on the issue.

“I’m sorry I cannot talk about the issue and in fact, I’m in Osogbo,” he said.di 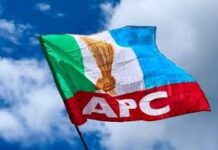 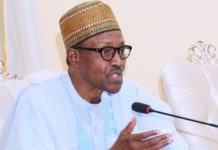