He told a news conference in Otukpo that after touring the nine council areas that comprise the Idoma-speaking Benue south senatorial district, known as Zone C, he felt standing for elections was the right thing to do.

“What I have done is to feel the pulse of our people to ask them if I can be supported to run for the seat. As a democrat, I feel that is the right thing to do. I have consulted widely with leaders of the party and elders of the land,” he said.

The ex-minister said he was convinced of the people’s support to undertake the task, having followed the politics of Benue south assiduously for many years learning under Senator Mark as he stressed that he knows the dreams of the people and have tried to help in the execution of his mandate for the people.

Moro who is contesting on the platform of the People’s Democratic Party (PDP) however promised to ensure the completion of ongoing projects by Senator Mark as well as initiate other projects that would positively impact on the development of the senatorial district. 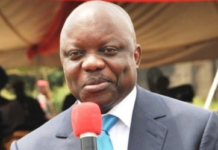