Injured former House of Representatives member and All Progressives Congress (APC) governorship aspirant, Hon. Opeyemi Bamidele, has been moved to Lagos for post-surgery treatment.
He was flown to Lagos aboard an Air Ambulance Chopper with registration number 5N-BSW belonging to Flying Doctors Nigeria, which landed at about 3.05pm at sports field of Christ’s School, Ado-Ekiti.
Bamidele was shot by a mobile policeman at the APC secretariat during a welcome rally for its governorship aspirant, Dr. Kayode Fayemi, on Friday.
The former federal lawmaker had a surgery on Friday which lasted about four hours to remove two bullets lodged in his abdominal region and leg. He was in a stable condition before being moved to Lagos.
The surgery was performed at Ekiti State University Teaching Hospital (EKSUTH) by a team of eight doctors including four consultants.
A statement on Sunday by his media aide, Ahmed Salami, disclosed that Bamidele was moved to Lagos for treatment as a follow up to the surgeries he undertook for the gunshot wounds he sustained.
Salami said although Bamidele’s health has stabilized appreciably, there was need for him to go for post surgery treatments to ensure quick convalescence for him to be able to join Dr. Fayemi’s campaign train, of which he has been playing a pivotal role.
He said: “We want to assure our teeming supporters to discountenance the misinformation by rumour peddlers that his health had relapsed, saying he was in a stable condition and people were already having unfettered access to him at EKSUTH before he left for Lagos.
“Dr. Fayemi and his wife Erelu Bisi Fayemi, Aare Afe Babalola, Engr. Segun Oni, Prince Dayo Adeyeye, Dr. Wole Oluleye, Barrister Victor Kolade and several other bigwigs in APC circle including ordinary
members of his party were allowed access to him on the sick bed confirming the appreciable level of his stability before being allowed to be taken out of the state.
“Let me put on records that his being taken to Lagos was caused by gross dearth of equipment and personnel at EKSUTH.
“As much as we salute the proficiency and commitments of the Doctors in the hospital, let me also added that many of the consultants and equipment used in performing the surgery were hired from other hospitals.
“To forestall a situation whereby we have to rely on bringing equipment that are readily available in other hospitals down to Ekiti to treat him, we decided to shift him to such hospital to fast-track his recuperation.” 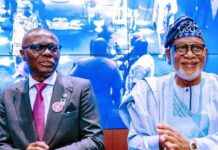