The International Monetary Fund (IMF) has said for Nigeria to witness strong economic recovery from recession, it must learn to maintain tighter monetary policies, through discontinuing direct financing of the government.

Ahead of the Monetary Policy Committee (MPC) meeting slated to hold from 25-26 of this month, members of the committee are expected to examine the key market indicators of moderating inflation or consumer price index, improvement in FX liquidity and friable growth of the economy – viz a viz unemployment.

In an exclusive response to questions by our correspondent on the recent recovery of the economy from recession, the IMF said despite recent positive policy actions, the 0.55 per cent GDP growth recorded in the second quarter of 2017 implies that a comprehensive package of measures remains urgent.

Senior resident representative and mission chief for Nigeria at the IMF, Mr. Amine Mati said for Nigeria to build on the recovery, it must learn to have “A tighter monetary policy, including through discontinuing direct financing of the government; moving to a unified and market-based exchange rate.”

Mr. Mati who commended the introduction of the Investor and Exporter Foreign Exchange window by the Central Bank of Nigeria (CBN), said it “has helped reduce the market premium below 20 percent.” He however added that “continued foreign exchange market segmentation remains a drag on activity”.

Beyond the monetary side, the fund believes that fiscal authorities need to give practical attention to structural reforms in key sectors of the economy. “Implementing structural reforms, including to reduce the large infrastructure gap (for example, in the power sector),” Mati said is one of the major ways to fully come out of the yoke of economic crisis in Nigeria.

According to available data, the federal government has sold about N2 trillion in local treasury bills between January and July of 2017.

Nigeria’s Debt Management Office (DMO) announced last week that it will auction N135 billion bonds worth of 5, 10 and 20-year on 27th of September, with a settlement date of 29th.

We expect a slight improvement in economic activity in the second half of the year—mostly reflecting greater availability of foreign exchange receipts, continued strong performance in agriculture, and stable oil production.Leadership 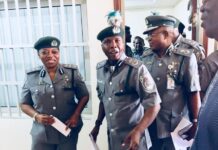