Vice President Yemi Osinbajo has said Nigeria will fulfill its destiny to be a great nation despite renewed separatist agitations.

He said noises over secession, quit notice are parts of the journey to be a great nation.

He asked Nigerians, especially the elite, to be prepared to make sacrifice to lift the nation higher.

Osinbajo expressed the confidence in his speech at the 2017 Eidl Al-Adha lunch at the State House in Abuja yesterday.

The Vice President stood in for President Muhammadu Buhari at the get-together.

He said: “ The significance of this celebration is the willingness of Prophet Ibrahim (Prophet Abraham as we know in the Old Testament) to make the great sacrifice of his son in fulfillment of his pledge toGod.

“It is the willingness to make a great sacrifice in order to be able to fulfill his own destiny and the destiny of his nation.

“Our nation’s elites must recognize that we all must make sacrifice to attain the destiny God has ordained for us.

“I am one of those confident that our nation will attain its destiny.”

He said Nigeria’s aspiration was to be a great nation and despite threats of recession and separatist agitations.

Looking unruffled by the threats, Osinbajo, amid applause, said: “Everyone knows that no woman delivers a baby without noise. What we are hearing are the noises of that great nation.”

The Vice President said the nation has enough resources to “become a pre-eminent black nation in the world.”

He said:”We are dealing with a vast country. This is a country where all other countries are looking for the resources we have . It is a nation of men so creative and so prosperous that van feed another country.

“Nigeria is a diverse nation, diverse in resources and diverse in opinions. Before you get tired of an argument, there is always another one.

“It is a country where if this person says ‘I am going my separate way,’ another person will say ‘if you don’t go your separate way, I will drive you away.’

“Today, Prof. Wole Soyinka is the Nobel Laureate we have. But we also have Chimamanda now following his footsteps. We are blessed as a nation.

On Boko Haram insurgency, the Vice President said he told the UK Foreign Minister last week that “it is so difficult to police the North-East.

“In fact, the North-East is bigger than the whole of the UK plus Denmark or Switzerland. It is not easy to police the zone.

“Over the past two years, our troops have managed to ensure that the insurgents don’t hold any territory unlike in the past when they were controlling seven local governments.

“I told the UK Minister that we are still going experience this sort of isolated suicide attack but we are doing our best to end the insurgency.

In his opening remarks, the Minister of Interior, Lt. Gen. Abdulrahman Dambazzau, who represented the Wife of the President, Hajiya Aishat Buhari, sought for more support for the administration of the president.

“We seize this opportunity to ask for more support to sustain peace and development in this country.

“We seize this opportunity to invite everybody to come on board. The good thing is that we have been doing a lot in the last two years to make this nation great.”

Reverend Israel Akanji, who represented the CAN President, said: “We are all to live as one , love one another to promote oneness, I believe we will all have one nation.”

The Director-General of the Voice of Nigeria( VON), Comrade Osita Okechukwu said: “The Nigeria journey may appear an endless journey but we will get to the Promised Land.” TheNATION 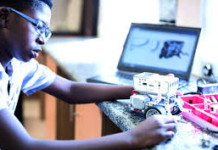 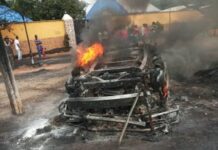 NSCDC officer, 2 others burnt as 2 motorcycles collide in Badagry 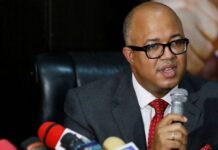 COVID-19: Why we insist on post-departure tests – NCDC

Nigeria in-talks with Canada to evacuate Nigerians affected by Pandemic