A statement by its Chairman, Mr. Austin Braimoh and Secretary, Mr. Cassidy Madueke, said government could build six world-class airports in each geo-political zone with part of the funds.

It added that the recovered loot was enough to have funded agricultural projects that would have generated employment for Nigerian youths.

The BMSG added that the N47.2 billion and 487.5 million dollars in cash and property traced to Alison-Madueke by the Economic and Financial Crimes Commission (EFCC) were also enough to complete the Lagos-Kano and Lagos-Calabar rail lines.

It noted that the Federal Government was already seeking loans for the rail projects.

The group called on Nigerians to join hands to condemn the massive looting of the nation’s treasury by officials of previous administrations.

It expressed belief that the loot traced to the former minister was a “far cry’’ from what she and others in the past governments pilfered from the national treasury.

According to it, these funds stashed in foreign accounts forced the Nigerian economy to suffer instant depression.

The group noted that Madueke and her associates, including Mr. Kola Aluko and Jide Omokore, were being tried by the United States (U.S.) government for allegedly laundering over 1.7 billion dollars.

It urged Nigerians to have a collective resolve to fight what it described as “psychotic and mindless’’ type of looting exhibited by indicted government officials in their days in government.

This, it said, could halt the craving to loot public treasury by government officials.

The group reminded Nigerians that though the fight against corruption was the foremost policy thrust of President Muhammadu Buhari’s administration, “the fight might not attain maximum result unless Nigerians willingly resolve to join in it’’.

“This synergy is necessary so as to fight the art of looting and other forms of mismanagement in government.’’

It stated that all concerned Nigerians should be organising widespread protests to condemn looting of government funds by officials, past and present, as often revealed by the anti-graft agencies.

Atiku: 2017 will be a year of recovery for Nigerians 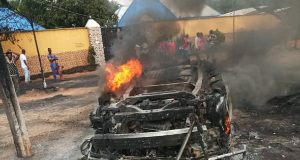