Abuja – The Nigerian National Petroleum Corporation (NNPC) said it will partner with the Bayelsa State Government to build a power plant in the state.

In a statement signed by the NNPC Group General Manager, Group Public Affairs Division, Mr. Ndu Ughamadu, in Abuja on Thursday, it said it was part of concerted efforts to resolve the nation’s electric power challenge

According to the statement, Group Managing Director of the NNPC, Dr. Maikanti Baru, stated this while receiving the Bayelsa State Governor, Mr. Henry Seriake Dickson who visited his office at the NNPC’s headquarters in Abuja.

Baru said the power plant would be built at the Bayelsa State’s proposed industrial park, noting that the collaboration would afford the state and NNPC the opportunity to share technical knowledge that would attract investors to the Niger Delta region.

“We have a lot of areas of collaboration. The NNPC will support Bayelsa State Government every inch of the way to deliver on the power plant in the proposed industrial park, ensure the security of oil and gas infrastructure and siting of other inclusive projects that would improve the lives of the people in the communities,” Baru said.

Baru also expressed interest in the state’s Brass Fertilizer Company, added that the NNPC was prepared to invest in the project as a shareholder.

He further stated that Bayelsa State was earmarked for the Federal Government’s Greenfield Modular Refinery project which feasibility studies had been concluded.

He said that the project was stalled due to the withdrawal of the foreign partners from the project.

Baru further explained the reasons for the delay in reaching Final Investment Decision (FID) of Brass Liquefied Natural Gas (BLNG), stating that the project had not taken off because arrangements are on for a market window for the product.

He said, “We have spent a lot of money on the Brass LNG project and we had planned the FID for 2012 but the shareholders were unable to secure the market due to new plants in East Africa and other developments in the industry.

“What the shareholders in Brass LNG are doing now is to redesign the plant and secure a market because without the market the project cannot go on.”

Baru pledged to rally NNPC and its Joint Venture partners to support the State Trust Fund in order to mitigate the incidences of pipeline vandalism which impact negatively on the efficiency of the operators as well as the environment.

In his response, Governor Seriake Dickson said the visit was to appreciate the laudable efforts of the GMD and his team and to solicit the Corporation’s support for the state’s security, development and the oil and gas industry.

Dickson disclosed that the state would seek an Oil Prospecting License, OPL, whenever the industry undertakes another bid round, adding that it needed such investment, over time, to augment the monthly allocation from the Federal Government. 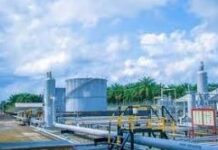 Oil Worth $42bn Stolen In Nigeria Within Nine Years – NEITI