The boats were built by DAMEN engineering, Netherlands under the strict supervision of the International Maritime Organization (IMO) while the engines were built by roll Royce.

Speaking at the commissioning ceremony, the Managing Director of NPA, Hadiza Bala Usman said the boats would allow NPA tug-in very big vessels of 200 meters and above adding that prior to this time, port operators had been concerned about the towing services provided by the NPA.

She described the boats as top of the range globally, saying that they are the best available internationally and that it would enhance NPA’s operations in the Eastern and Western Ports.

“The tug boats will provide the authority the avenue where we can tug in very big vessels ‎ because lots of our operators at the seaports have been concerned about the towage services. But what we are providing with this new MT in addition to our fleet we will be efficient in delivering towage services in our pilotage districts”

“We are looking to reconcile the crafts because we have 9 tug boats now and we will look at the requirement ‎across the respective zones and deploy them accordingly.”

“The budget circle started since 2015, it was an ongoing procurement process because we budgeted and spent over $30m‎ to procure this four tugboats.”

The MD said the names of the crafts were chosen from towns and communities of Nigerian leaders.

“We identified towns and communities where leaders who have led this country came from that is what led to the ‎naming of the vessels.”

Also speaking, the Chairman of the Board of NPA, Emmanuel Olajide Adesoye said that it took 18 months to build the Tug boats. 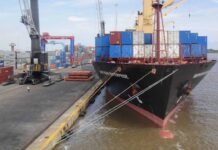 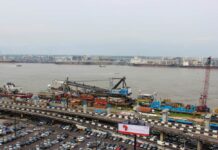 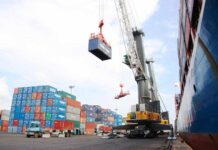 NPA expects 23 ships with petroleum products, others at Lagos port