The National Bureau of Statistics announced this on Tuesday, saying the December quarter was its fourth quarter running of shrinking.

Gross domestic product was 1.3% lower in the December quarter than in the previous fourth quarter after shrinking 2.2% in the September quarter. The median of 10 economist estimates compiled by Bloomberg was for the economy to shrink 1.4%.

GDP contracted 1.5% for all of 2016, the first full-year drop in 25 years, according to International Monetary Fund figures. 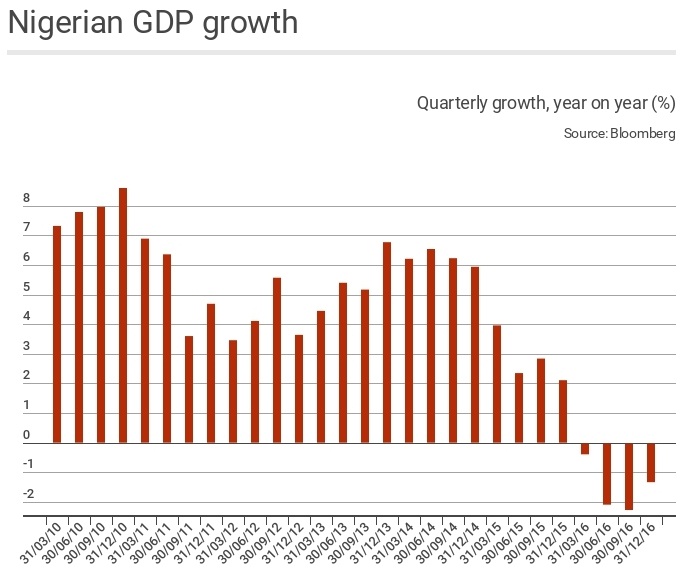 Lower prices and output of oil, Nigeria’s biggest export, cut government revenue by about half and reduced the foreign currency available to import refined fuel and factory inputs.

A weakening naira contributed to inflation accelerating to the highest level in more than a decade, prompting the central bank to increase its key lending rate to a record 14%.

Nigeria’s economic woes were worsened by a five-month delay in approving spending plans for 2016 needed to stimulate business activity.

The government said improving crude prices, and the restoration of stability in the Niger River delta — where militants blew up pipelines, cutting crude production to almost three-decade lows in 2016 — will help the economy rebound this year. The IMF forecasts the economy will grow 0.8% in 2017.

Fourth-quarter GDP was 4.1% higher than in the third quarter, the statistics agency said.

The nonoil sector contracted 0.3% in the December quarter and 0.2% in 2016. A drop in real estate, manufacturing, construction and trade weighed most on the nonoil sector.

“The poor performance of the nonoil sector is due to weak demand and a crippling foreign-exchange shortage,” said John Ashbourne of London-based Capital Economics. “Higher oil prices will boost incomes and demand in 2017, but we don’t expect a quick turnaround.”

Vice President Yemi Osinbajo has promised to increase development projects in the Niger delta, including plans to build a $20bn industrial gas park, and create 250,000 jobs. That, and “resumption of compensation to some of the militants will bring some stability to the delta and increase oil output”, said Yinkere.

The economy might contract less than 1% in 2017’s first quarter before resuming expansion in the second, Yinkere said. Yvonne Mhango, an economist at Renaissance Capital, and Capital’s Ashbourne predicted growth of 0.5% and 2% this year respectively.

The Central Bank of Nigeria said last week it would increase the supply of foreign currency for Nigerians to pay school and medical fees at an exchange rate not more than 20% above the interbank market price.

While the regulator removed a currency peg in June, it continues to block imports of items it deems nonessential from the official foreign-exchange market, forcing importers to buy dollars on the black market, where the currency is about 30% more expensive.

Before the release of figures, JPMorgan analysts Sonja Keller and Yvette Babb said Nigeria was not “ready to embrace a liberalised exchange rate or depreciation that would prove highly attractive to portfolio investors”. The spread between the naira’s black market and official rates would probably remain wide.

MPs say they will next month approve 2017 spending plans to increase investment in roads, ports and power to boost factory and farming output.

The 7.3-trillion-naira ($23.2 billion) budget has a deficit of 2.36-trillion naira, almost half of which the government plans to plug with foreign borrowing. The state sold $1bn in Eurobonds in February and may return to the markets for $500m more.

Nigeria’s PPP must work together to prevent COVID-19 outbreak from ...

Nigeria could save $107.5 million under debt relief initiative, World Bank...