Bayelsa state government spends N3.52bn on debt service to commercial banks in May

…we need to use data to help trace the impact of deployed infrastructure and expose areas of weakness in public service delivery. Linked data as exemplified by the OCDS and implemented by Budeshi can help us make sense of public sector processes that affect our life’s quality.

Goal 3 of the Sustainable Development Goals enjoins us to ensure healthy lives and promote well being for all, at all ages. Beyond these goals, healthcare accessibility for all has always been a primary function of government; and in countries such as Nigeria, accessible healthcare is constitutionally guaranteed. At the moment, the United Nations’ baseline for Nigeria shows that poverty significantly affects our health and life expectancy.

Data received on request from the National Primary Health Care Development Agency (NPHCDA), whose role is to promote primary healthcare across Nigeria, indicates that between 2001 and 2014, up to 30.4 billion naira (153 million dollars) has been spent on the construction of 1,438 primary healthcare centres across various locations in Nigeria (see chart). 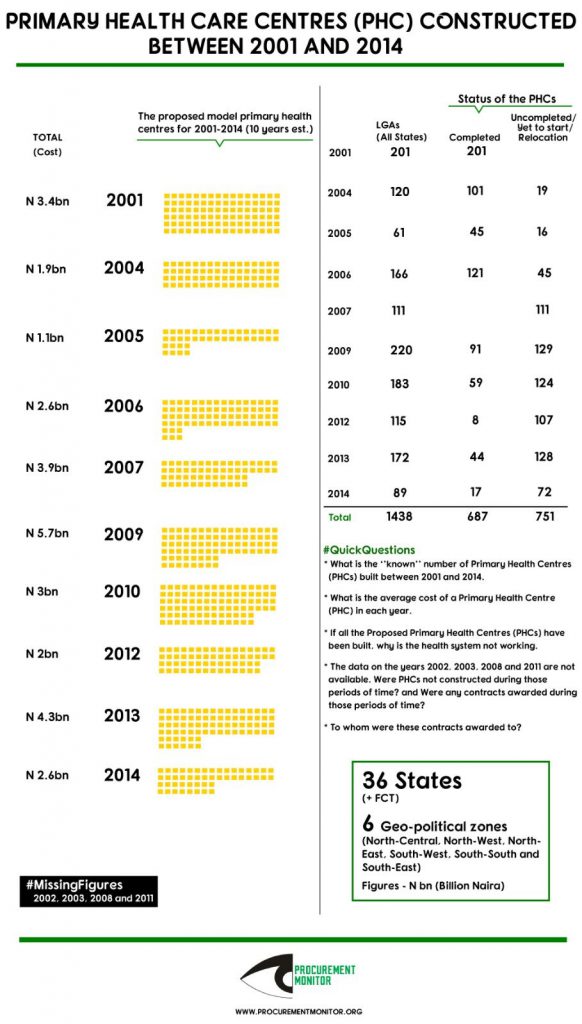 On further request, the NPHCDA also provided us with the contract amounts, the status of these projects and the names of the contractors that built these centres. The NPHCDA made it clear that the data provided is inexhaustive as many more PHCs were built by other agencies and bodies.

Certainly, the amount of resources dedicated to the construction of PHCs in the space of a decade shows a level of commitment to ensuring healthier lives. What is more important, however, is the contribution these PHCs actually make to healthcare access. And so to ascertain this contribution, procurement monitors, who observe and report on the process through which public goods are acquired, were commissioned to use the data obtained to trace the location of the primary healthcare centres, the services they offer and the experiences of people who access their services.

However, to do that, the first task was to make sense of the available data. Unfortunately, this proved to be a herculean task for several reasons: first it was difficult to link the data on budget estimates with the data on eventual sums for contracts awarded because different standards and labels were applied at each stage; second, the locations where these contracts had been executed were not clear enough to enable us identify each of them.

To deal with this challenge, data from the MDG website (which contains more specific physical addresses of primary healthcare centres across Nigeria) was obtained. Thereafter, there was a need to link the data received from NPHCDA to the data on the MDG portal. To achieve this, uniform labels and identifiers were needed for both sets of data. So, we turned to the Open Contracting Data Standards (OCDS) for help. Using “Budeshi”, our locally-developed web platform, we converted existing data from NPHCDA and the MDG portal to the OCDS. Essentially, Budeshi helped us ensure that each contract from conception to budget to contract award was provided with a unique identifier. Then using its inbuilt visualisation tool, it became possible for us to link budget and procurement data and compare data across various stages of each contracting process. Thus, working with the available data at our disposal, we were able to unearth links between the budget and procurement data for some projects. One of these was a primary healthcare centre in Bwari area council in Nigeria’s Federal Capital Territory which was completed in 2014 for the sum of N21,986,983.95. 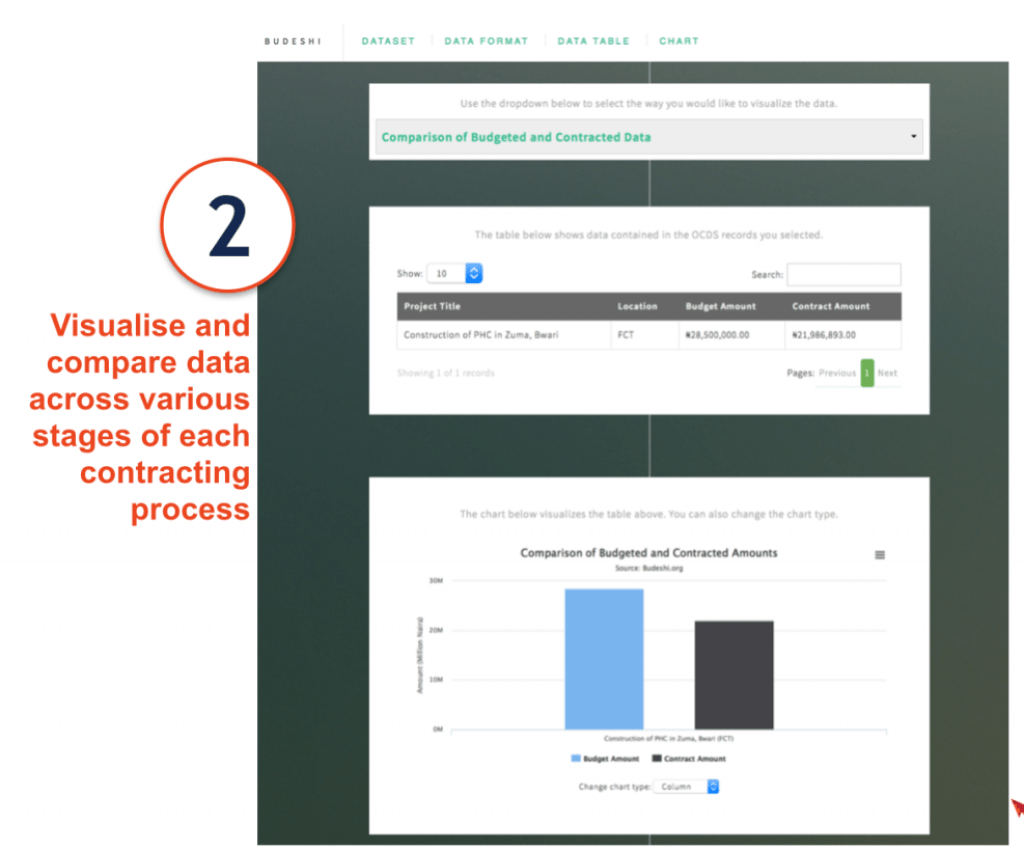 Budeshi means “Open it” in Hausa and it is a platform that demonstrates the utility of the Open Contracting Data standards (OCDS) by linking budget and procurement data to public services. At the moment, it serves the purpose of an advocacy tool; being used to seek for the adoption of the OCDS by the Nigerian government. Its replication is also being discussed in several African countries.

Beyond Brick and Mortar

Armed with the required information, we paid a visit to this primary healthcare centre. It was a decent building, fenced compound, right in the middle of a closely knit farming community called Zuma. Indeed, the PHC is situated in the centre of one of the little farmlands within the community. As with most newer housing projects in Nigeria, the PHC had an overhead water storage tank indicating that there was also a borehole dug for it. To confirm this, there were details showing the contract for the provision of a borehole. We passed by two young men tending their farms and went right to the entrance of the PHC and found out that it was locked. It was then that one of the young men, Isaac, came over and after we explained our mission he unlocked the entrance and we went in. Although the building was completed and fixtures such as toilets were in place, it was obvious that the PHC was abandoned. Isaac and his companion, Haggai, informed us that the Zuma community had been excited when the PHC was being built because they had believed that it would take away the hardship of having to access health services farther away – especially in emergency situations. Unfortunately, since the completion of the PHC, it has neither been commissioned nor used for its purpose. Two years after its construction, the existence of a PHC in Zuma community has made no difference to the lives of its inhabitants.

Isaac went further to tell us about the painful experience of his sister Abigail who, some months ago, went into labour after midnight. With no motorable access road or vehicle to transport her to the General hospital in Bwari, Abigail’s situation became desperate. Unfortunately, the newly constructed PHC right beside their home was of no use even though its structure suggests that it is a Type 2 PHC, which from the minimum standards made available by NPHCDA, is supposed to provide childbirth support and services. As Isaac narrated Abigail’s ordeal to us, it became glaring that the need to use data to enable a robust culture of accountability was vital to improving the wellbeing of people in Zuma and everywhere else in the country. 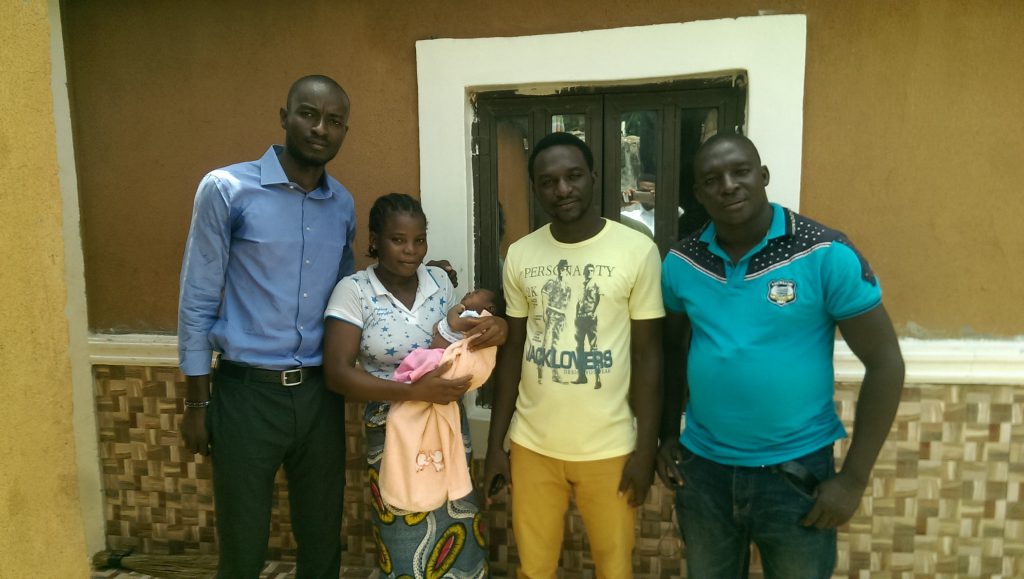 From Data Disclosure to Public Accountability

To a certain degree, access to data on public resources is possible. This narration for example, relies on data pieced together from various sources – the budget website, the MDG portal and from responses to requests for information from NPHCDA. The challenge faced is that it is difficult to match this data together because they appear in various standards. Within the contracting cycle, which is the process through which public goods are acquired, for example, disclosure needs to be deliberately carried out in a way that enables linkage of budget and procurement data to public services using agreed standards. This essentially adds an element of “coherence” to data and makes it all the more useful as a tool for accountability.

Where data on the contracting process is openly accessible in a way that is coherent and based on clear standards, the platform is set to have various stakeholders engage with the data from various points of interest.

Such engagement is most likely to empower and elicit public reaction; and this would, of course, require engagers to publicise their findings so that others are encouraged to engage as well. Public reaction in turn can lead to a change in certain policies or ways of doing things, a redress, a more conscious and conscientious society, because it becomes clearer to everyone that just because you build a school, for example, is not sufficient reason to be re-elected if the entire process of access to education was not well thought through. It is in doing this that we close the accountability loop. This is what the Budeshi platform demonstrates.

Budeshi means “Open it” in Hausa and it is a platform that demonstrates the utility of the Open Contracting Data standards (OCDS) by linking budget and procurement data to public services. At the moment, it serves the purpose of an advocacy tool; being used to seek for the adoption of the OCDS by the Nigerian government. Its replication is also being discussed in several African countries.

Abigail survived the ordeal of being transported on a motorcycle in the dead of the night to the General hospital. But we must not take for granted the fact that people in these areas are used to certain hardships. To do so would also be to accept the high rate of maternal mortality, most of which is underreported in the poorest parts of Nigeria and across sub-saharan Africa. Rather we need to use data to help trace the impact of deployed infrastructure and expose areas of weakness in public service delivery. Linked data as exemplified by the OCDS and implemented by Budeshi can help us make sense of public sector processes that affect our life’s quality.

Seember Nyager is an Open Government fellow with Code for Africa/Open Knowledge seeking for the adoption of open contracting data standards in Nigeria.

Budeshi is an initiative of the Public and Private Development Centre in partnership with the School of Media and Communication, Pan-Atlantic University and Premium Times Centre for Investigative Journalism.

Some names used in this article, first published on blog.budeshi.org,have been changed to protect the identities of the individuals concerned.