Tyson Fury’s world title clash with Wladimir Klitschko should this week be rescheduled for the end of November. 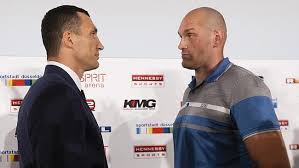 Klitschko is having his calf injury, which caused the fight’s postponement, assessed by the world-renowned Dr Hans Muller-Wohlfahrt.

It is understood the WBA Super, WBO and IBF heavyweight champ has suffered just a minor tear to his muscle and hopes to be given the all-clear in the next 48 hours to fight Fury.

Fury’s promoter Mick Hennessey said: “Wladimir Klitschko is seeing his doctor this week and the signs so far have been pretty optimistic. We are hoping to reschedule by the end of November.

“Ourselves and the Klitschko camp are definitely looking to try and make the fight happen this year, especially after the press conference we’ve just had and this is the fight worldwide.

“We’re waiting to hear from Klitschko’s camp by close of play on Friday and both camps want to get the fight on as quickly as possible to cause the least disruption to the fans.”

The unbeaten Fury is continuing to train at Morecambe, even inviting fans on twitter to join him Rocky-style on his early-morning runs on the front, and Hennessey says he is coping with the delay.

“Tyson’s not new to this sort of situation,” he said. “Him and Peter will be working around this situation to make sure it does not disrupt the camp too much.”