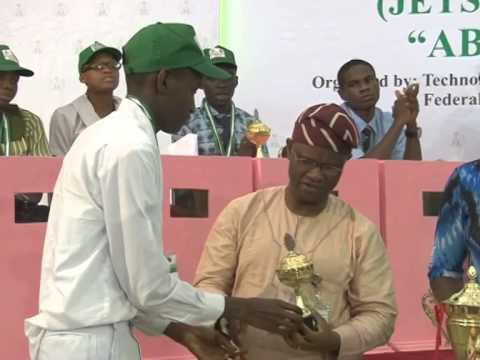 She said the state also came third in Physics and Technology Competitions and took fourth position in Mathematics Competition.

“While Fisayo Fatoye and Abiola Omosowon both of Doregos Private Academy, Ipaja, came first in the Free Choice Project Competition, with their project titled Power Generation Through Resonance,” she said.

Oladunjoye said the victories automatically qualified Lagos as Nigeria’s representative at the 2015 International Science and Technology Competition at a yet-to-be- determined venue by the Federal Ministry of Education.

“Lagos State represented the country at the 2013 Taiwan International Science Fair, where she came second and third in the Chemistry category of Project Exhibition at the fair,’’ she said.

The JETS Competition was aimed at promoting the experimentation and application of scientific and technological concepts by students.

It is also aimed at improving some indigenous technology products as well as designs and fabrication.

It promotes generation and fostering of the interest of students in the acquisition of basic manipulative skills in science and technology among others. (NAN)

Italian court rules food theft 'not a crime' if hungry