Third-quarter revenues at BMW rose 4.5 per cent to €19.6bn, helped by a rebound in European car sales. Revenues over the nine-month period were up 3.4 per cent.

However, it warned: “If the economic situation in Europe does not continue to stabilise, new challenges will have to be faced, despite the current upward trend.”

While the economic recoveries in the US and UK have been gaining traction this year, the eurozone has fallen behind as it struggles to stimulate demand amid stubbornly high unemployment and falling inflation.

Car markets in Europe expanded overall by 5.8 per cent. The fastest growth rates were recorded by those countries that suffered the greatest contractions in recent years, with Spain rebounding with a 17.2 per cent gain and Portugal jumping 35.3 per cent. These figures compared favourably with the more moderate growth rates recorded in Germany, which rose 2.9 per cent, a gain in France of 2.4 per cent and Italy 3.7 per cent.

The cyclical upturn in the UK had a positive impact on car registrations, which grew sharply by 9.1 per cent. 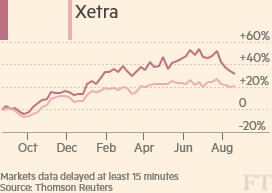 In China, an increasingly important market but where the pace of broader economic growth has been slowing, BMW said registration figures over nine months jumped by 12.9 per cent, “mainly reflecting continued strong demand from private consumers”.

But other emerging markets showed problems. Registrations in Brazil fell 9.4 per cent. In Russia they declined 12.3 per cent.

How to tackle corruption | The Economist
Recent Posts

Onitsha: We Have Fished Out Killer-Policeman, Commissioner