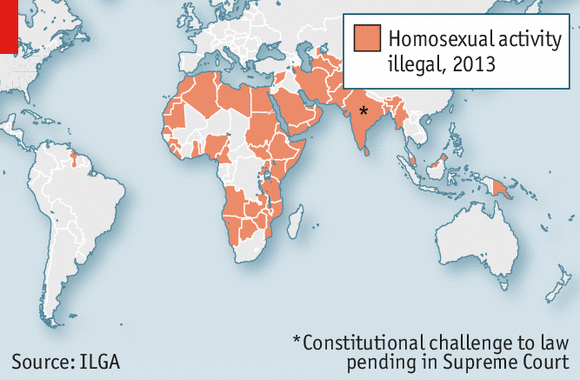 ANTI-GAY laws in Africa and elsewhere are often the legacy of European colonial rule. Yet European Union countries, which now champion gay rights, are grappling with asylum claims from people in more than 100 countries who face punishments such as “corrective” rape (mostly for lesbians), torture, jail and even death.

But policies vary. Italy automatically gives refuge to anyone from the more than 75 countries (see map) that formally outlaw homosexuality. Spain makes it a lot harder. The Netherlands turned down three men from Senegal, Sierra Leone, and Uganda in a case which has now reached the EU’s highest court.

The European Court of Justice, in a ruling on November 7th, tried to set a common rule. It did not say that refugees from countries which outlaw homosexuality automatically deserve asylum. What should count is how harshly the laws are enforced. A jail sentence (if applied) is persecution; a fine is not.

Campaigners are outraged. The notion of “benign criminalisation” is extremely dangerous, says Livio Zilli from the International Commission of Jurists. Even mild or unused anti-gay laws can encourage vigilantes, and make it hard for their victims to go to the police. The court’s ruling lessens pressure for their repeal. Sherif Elsayed-Ali of Amnesty International says that criminalising people “for who they are” is itself persecution. The court missed a chance to say that. And gays can be hounded in countries where homosexuality is legal, such as Russia.