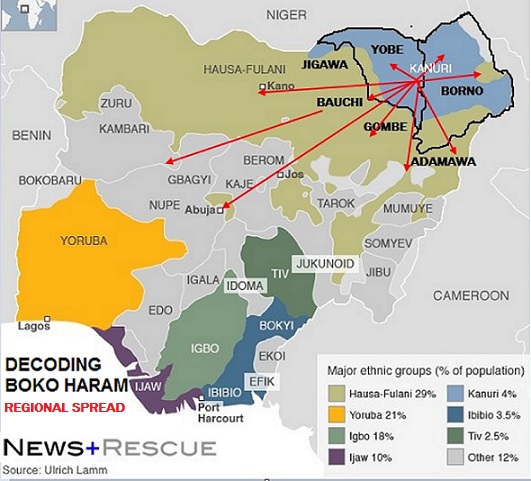 NewsRescue- Beyond the government silence on Boko Haram, its sponsors and affiliations, beyond the media failure to investigate this unique terror phenomenon in Nigeria. Beyond the public?s frustrations and anger at this Northern stemming reign of terror; NewsRescue decided to figure out who Boko Haram are, where they are from and what they represent.

Our investigative team presents for you the simple, overlooked facts about this obscure, yet conspicuous organism that has presented a unique type of terror threat, before unseen on the planet. Boko Haram targets blindly, they are accused of and have taken responsibility for over 1000 bombing deaths per year for the last 2 years, these include, Churches, Mosques, government buildings including the UN building in Abuja in 2011; they also target media houses and telecommunications infrastructure.
The Kanuri and the Fulani

Nigeria in the 70′s was looked at as having simply three ethnic groups, the Hausa?s in the North, the Igbo?s in the East and South and the Yoruba?s in the South-west. As time passed, people got more informed and realized that there were many other groups, many almost as large as and rivaling these three major groups. And many of these unrecognized groups hated more than anything, being filed under some of the three main groups. Indeed there are over 500 unique ethnic groups in Nigeria according to  NigerianWiki.com/Languages.

In the late eighteenth century, insecurity characterized the Hausa and Borno, Kanuri states of Nigeria. Many were disenchanted with the state of affairs, and in a revolution against this, the famous Fulani Muslim warrior, Shehu Uthman Dan Fodio overran Nigeria?s north. In 1809, he founded the Sokoto caliphate. By virtue of his reign and work, including writing over 100 books on religion, government, culture and society, Dan Fodio, an urbanized Fulani invariably led to a Fulani elite culture in northern Nigeria with most ruling or ambitious households embracing the ?Fulani? label.

Certain parts of the north were not conquered by the Dan Fodio, Fulani empire. Included in these were the Argungu in the North where Kebbi rulers holed up, and important to this piece, in Borno, where though the mai was overthrown, the Al Kanemi fashioned a powerful resistance and forced the Fulani to retreat west and south. The Al Kanemi then supplanted the eight hundred year old Safawa Dynasty ruler of Borno and established his lineage over these Kanuri people.

To cut the history lesson short. The north ended up having two major independent dynasties: The Sokoto Hausa-Fulani caliphate, and the Kanuri Al Kanemi dynasty.

But the thwarting off of the Sokoto Caliphate by the al Kanemi with help of Shuwa Arabs who he chattered to join his military ranks, was not the only feud between these two dynasties. The Kanuri Al Kanemi also contested with the Sokoto caliphate with a barrage of literature, books and letters, in an ideological battle. This he did knowing that the strength of the Dan Fodio regime was not just military, but based on theological, legal and political civil documents.

With this very clear line recognized between the Hausa-Fulani, under the Sardauna of Sokoto as traditional head and the Borno-Yobe et al, Kanuris, who take religious and traditional directive, not from the Fulani, but the Shehu of Kanuri Borno, we immediately see a vital aspect of Boko Haram?s history and roots that has been largely ignored by most.

We might just be the grass, in the clash of two crazy and greedy Elephants.

Boko Haram is not a Hausa-Fulani phenomenon

Boko Haram is a revolution that stems from the center of the Nigerian Kanuri empire. The major states and parts of the states involved are Borno, parts of Yobe, parts of Bauchi, parts of Gombe and where many Kanuri reside. The Kanuri, though, like the Ijaw are known to widely disperse and acculturate in their host communities.

In analyzing any urban renegade insurgency as in Boko Haram, it is essential to separate strategic leadership and interests from tactical leadership, interests, tools and soldiers.

It is glaring that Boko Haram has most of its essential strategic leadership among the Kanuri people. On October 19th, 2012, a Boko Haram commander, Shuaibu Bama was arrested in a sitting senators domain. Senator Ahmed Khalifa Zanna conceded according to media reports, that upon the Nigerian security forces beating up his family children, the kids brought out the commander, who happens to be his sister?s son/nephew.

Without question, his family and possibly himself knew of this youth?s operation as commander of this deadly, merciless terrorist sect. But he is not the first Kanuri senator to be implicated. Another Senator from Borno, Mohammed Ali Ndume has been arrested since November 2011, even though very not surprisingly, the Nigerian government and judicial system allowed him escape to Saudi Arabia. He too has been powerfully implicated as a Boko Haram mastermind. Boko Haram?s founder, Mohammed Yusuf was of course a Kanuri from Borno, as is the new face of the group, the alias, Abubakar Shekau, who is from Shekau village in Yobe state.

Many other arrests have been alleged to have occurred in and linked to prominent Borno, Kanuri government officials and their residences.

What are the interests of this Kanuri based sect?

The question to ask is- what can the Kanuri radical interests be? Before answering this question, it must be noted that the ruling Shehu of Borno, does not appear in league with Boko Haram and he himself has been targeted by this group of traditional Kanuri fanatics. It is possible that they for one, do not recognize his reign and wish among other interests, to replace him. The Shehu was born in Damagum, Yobe State and not Borno and only returned to inherit the throne.

Traditionally one of the richest dynasties in Africa, the states under the Kanuri flag are now known as some of the poorest states in the federation and world, and as per Nigerian politics, they have been progressively been losing a foothold on power.

When you think about the Kanuri, it is essential to remember the person of no other than late president Abacha. He, like a few other of his political peers, is suspected to originally be from Chad and not even Borno, though the man with his proud Kanuri ethnic marks, claimed Kano state. He set up and funded one of Nigeria?s first terror networks.

The assassination of Kudirat Abiola, was suspected to be the handiwork of a terror network, established by Abacha. Abacha?s national security chief, Ismaila Gwarzo has long been fingered in the running of a network of assassins, via the ?strike force?, and he had access to immeasurable wealth by virtue of his position. Gwarzo has been accused of stealing an estimated $2.45 billion from the Nigerian Central Bank. The Abacha created paramilitary ?Strike force?, was an elite force trained abroad, in North Korea, etc.

It is possible that the wherewithal and security force created by Abacha could be what is let loose as Boko Haram for political goals. Knowing that terrorism requires sophisticated military and tactical know how, is it possible that the Abacha apparatus is the origin and foundation of Boko Haram? We must ask, where is the Gwarzo money and where is the Abacha ?Strike force??

Next, the rivalry between Borno State Governor and king maker, Ali Modu Sheriff, and Mala Kachalla, comes into mind, the governor?s brother, Goni was murdered as was his cousin, ANPP Deputy Zonal Chairman, Awagana Ngala. Could some of this be a feud between these two politicians?

And then, the Kanuri politician who likes to call himself, ?King I be?, Baba Gana Kingibe, must be remembered, being another most powerful Kanuri indigene, also suspected to have origins outside Nigeria, Niger to be precise, with his years of ambition to rule Nigeria.

He is most certainly not feeling too good right now after being sacked by the Yaradua government upon Yaradua?s return from the hospital in Saudi Arabia, to ?realize? that in his absence, Kingibe who being the Secretary of the government, was the official number 4 and administrative number 3 man, was already printing posters and planning his campaign for presidency in the hope of Yaradua?s demise. That?s ?beef? between Kingibe and Yaradua and current president GEJ (Goodluck Ebele Jonathan). 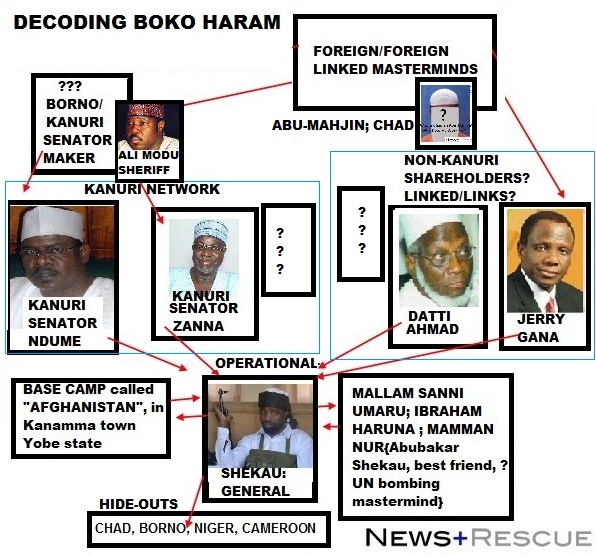 The Rise and Fall of Baba Gana Kingibe

Kingibe?s first sin is indubitably his insensate ambition to become Nigerian president and, perhaps, the first university-educated Northerner to do so, as evidenced by his total lack of interest in state politics and offices. Yar?Adua, ironically beat him to that goal. In reality, however, Kingibe has long been groomed for leadership.  In addition, he is eminently well tutored and therefore qualified for national leadership tasks. Having been a foreign service officer, an ambassador, a principal officer at the supreme military headquarters, a political director in the cabinet office, secretary of the constituent assembly, minister of interior, minister of foreign affairs, minister of power and steel, a member of the Inter-Congolese Facilitation team,  and a special representative of the AU [African Union], his resume is an enviable one.  Fittingly, renowned Nigerian blogger, Dr. Wumi Akintinde cited Kingibe, amongst others as ?a recurring decimal in the Nigerian political equation.?

In active politics, Kingibe has been chairman of a major political party, a vice presidential candidate, a presidential candidate and, most recently, Secretary to the Government of the Federation.  He was on the Abiola-Kingibe Social Democratic Party (SDP) ticket that won the annulled 1993 presidential elections, considered the freest and most credible in Nigeria?s history.  These, unquestionably, are very impressive credentials, except of course, that BGK is also a man with hefty political baggage and the attending detractions and enmity.

For starters, many disdain Kingibe because he is well versed in Nigeria?s military anti-politics and has been a key beneficiary.  Secondly, he is very outspoken to the point of being arrogant. Nevertheless, it is much to his credit that he can easily mix such bluntness with his fine diplomatic skills. However, if Kingibe has committed a cardinal political sin, it is the widely held belief about his presumed betrayal of Chief MKO Abiola and the June 12 cause.  In 2007, Ubanese Nwanganga summed up the angst against Kingibe with these acerbic words:

?BGK has demonstrated that he has no conscience. He has no conviction. He is like a prostitute, who engages any number of different men a night just for her money. There is no attachment to such relationships. She wants the money and how it is made is immaterial.? (see The Return of Baba Gana Kingibe) Read More?

Kingibe: Sacked by the Katsina Mafia