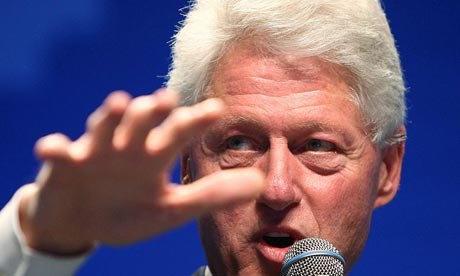 Bill Clinton is being talked about as the next president of the World Bank. Photograph: Ethan Miller/Getty

Read by 110 people
Remove from timeline

The World Bank desperately needs to revive its fortunes after years of lacklustre leadership and shrinking role – which is precisely why former US president Bill Clinton is among the names being touted as its next head to replace Robert Zoellick.
Lael Brainard, under-secretary for international affairs at the US Treasury, has been responsible for drawing up the White House’s shortlist of candidates to replace Zoellick.
Alongside names such as Larry Summers and Tim Geithner, speculation in Washington has been rampant if unsourced that Bill Clinton’s name is in the frame, and the constant rumours that Hillary Clinton was interested in the job – repeatedly denied by her – were in fact a misunderstanding over which Clinton was a candidate.
Hillary Clinton’s role as US secretary of state would be a bar to Bill taking the top job at the Bank – but Hillary’s decision to step down after the US presidential election later this year removes that obstacle.
But another obstacle to Bill Clinton – or any of the other American candidates – is the US’s pledge to open up the top job to candidates that don’t hold a US passport, including a commitment made at the G20.
Since the IMF and the World Bank were established, the pair of multilateral finance institutions have had their leadership carved up between the Europeans in the IMF and America in the World Bank. And for years activists have been trying to overturn that situation, especially in the case of the Bank because of its wider role in the developing world.
But the current voting structures favour the status quo, with the Europeans and Americans able to impose their own candidate if things got ugly, while the US alone can effectively veto a candidate it didn’t approve.
President Obama could take the bold decision to open the Bank presidency to a non-US citizen. But it remains too tempting to use that power to reward a political ally, especially for a desirable post that doesn’t require a battle with Congress for confirmation.
Obama has also come under fire from the Republican presidential contenders for “apologising for America” – in Mitt Romney’s words – and for lacking leadership. Appointing a non-American to a job previously seen as a US satrapy by the US Congress could give substance to those attacks. With an election looming Obama may take the easy option, along with some window dressing of including one or two names of well qualified candidates from the developing world such as Nigeria’s minister of finance Ngozi Okonjo-Iweala.
The attraction of a Bill Clinton candidacy is that his reputation makes him acceptable to Americans and many non-American critics alike, preserving the US government’s commitment to an open appointment process while keeping the post in US hands.
The only major question mark over Bill Clinton would be his health – if the 65-year-old is unwilling to undergo medical tests and the potential humiliation if he is rejected on grounds of fitness.
One close observer of the Bank said that Bill Clinton “has the stature” to be a transformative president, “able to change the Bank and the courage to take it in new directions,” by overhauling its management structure.
And there is one possible candidate said to be interested in the job who would be a ground-breaking non-American choice while still placating US critics: Tony Blair. The former British prime minister has privately expressed interest but how seriously remains an open question. Blair’s candidacy would not be embraced by the current British government. But if the White House was open to it then No 10’s opinion would hardly sway them.