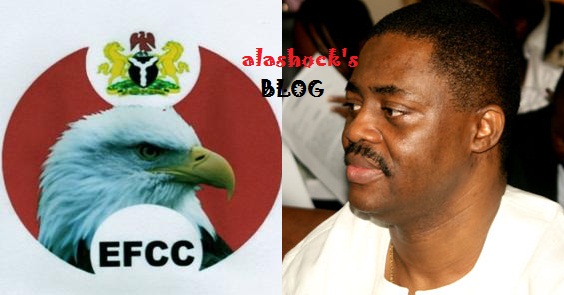 The Economic and Financial Crimes Commission (EFCC) has re-arraigned former Minister of Aviation, Femi Fani-Kayodeon a 47-count charge of money laundering before a Federal High Court sitting in Lagos.

The former Minister who was first arraigned before Justice Ramat Mohammed of the same court on December 23, 2008, was re-arraigned before a new judge, Justice Binta Murtala-Nyako on Thursday because of the re-assignment of the case by the Chief Judge following the transfer of Justice Mohammed out of Lagos.
Femi Fani-Kayode has pleaded not guilty to all the counts and Justice Murtala-Nyakoordered that he should continue to enjoy bail on the same terms granted by the former court.
The former minister is accused of laundering various sums of money totaling N230 million through some of his aides, his wife, Regina Fani-Kayode and daughter, Remilekun between August 2006 and March 2007.
His counsel, Chief Ladi Williams told the court that a motion seeking to stay further proceedings at the Federal High Court is expected to be heard at the Supreme Court on the 21st of May.
According to the counsel, “an interlocutory appeal against the decision of the Lagos Division of the Appeal Court which admitted the statement of account of the former minister as evidence has been entered at the Supreme Court.”
Mr Fani Kayode’s counsel was also opposed to the re-arraignment of his client on the premise that the judges of the Appeal Court while admitting his client’s statement of account as evidence did not order for a fresh trial.
ACADEMIC EXERCISE
Prosecution counsel, Festus Afeiyodian, however contends that the re-arraignment of the case has rendered the interlocutory appeal lodged at the Supreme Court an academic exercise. He submitted “that there is no proof that the said interlocutory appeal has been entered at the Supreme Court.”
Justice Nyako while adjourning the matter till the 24th of April for mention directed the defence to file necessary processes regarding the interlocutory appeal. She also directed the accused person “not to travel out of the country, without the leave of the court pending the final determination of the suit.”