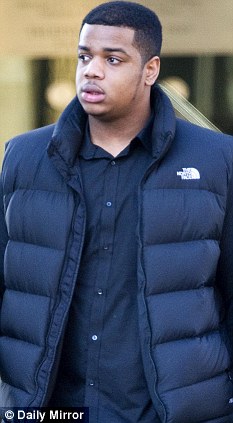 A teenager of Nigerian origin, Adrian Nnamdi, who took part in a mob attack on a string of high-end London shops during August’s riots was jailed for 18 months today.

He was among a gang of looters who stole almost £400,000 worth of designer clothing after using hammers and other weapons to smash into The Mall in Wood Green, north London.
Wood Green Crown Court heard that the attack took place on 7 August last year, and that the shops targeted included designer clothing stores Mush and Hype, and jewellers A & C.
Hype sells high-end brands such as Versace, Armani, Moschino, Ted Baker, Stone Island and Ray-Ban and had its entire stock cleared out in the riots.
CCTV footage of the incident captured Nnamdi wandering round the shopping mall at 4am looting seen carrying two bags of loot and a hammer. David Edwards, prosecuting, said the total loss to Mush in the riots was more than £300,000, while Hype reported a £60,000 loss.
The 18-year-old college student, who had hoped to study electrical engineering at university, was aged 17 when the violent disorder broke out in Tottenham, north London
Although he was caught on camera, officers were initially unable to identify Nnamdi. He was snared only after being arrested over a separate street robbery, when DNA samples he gave linked him to three shops at the riot scene.
The teenager, from Wood Green, north London, pleaded guilty to three counts of burglary.  Krystelle Wass, defending, told the Court Nnamdi was an intelligent young man who had acted ‘incredibly foolishly’ on that evening.
She said: ‘He was headboy at his secondary school and was a peer mentor. He continued his success in college, which he was due to finish in four months’ time. He has studied incredibly hard up until now.
‘He feels disgusted with himself at being before the court. He is somebody who understands the consequences of his actions and the impact this will now have on his future and his family.’

Jailing Nnamdi, Judge Simon Carr said he had lied to the court when he was sentenced previously over the street robbery, for which he received a suspended sentence.