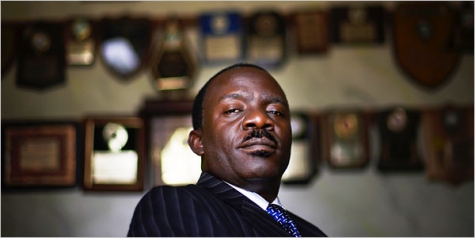 Last month, the Central Bank governor, Mallam Sanusi Lamido Sanusi granted a provocative interview to the influential financial times. In the said interview Mallam Sanusi blamed  the emergence of the  Boko Haram terrorist sect on the  the 13% derivation allocated  to the oil producing states from the federation account. The publication of the  ill advised interview coincided with the increasing wave of the murderous attacks  of the nihilist organization on innocent people in many parts of the country.
Since the CBN governor was not called to order for the reckless and diversionary interview by the federal government  Mallam Sanusi has been reported to have  engaged in the extra-budgetary  donation of N100 million to the victims of the Boko Haram menace in kano city on behalf of the central bank of nigeria. The illegal donation should not go unchallenged at a time that several nigerians are saying “To Thy Tents O Israel” due to their  unwarranted displacement in some states of the federation.
Government officials who have no concrete solutions to the problems confronting the masses of our people should stop resorting to  base religious and ethnic sentiments to further divide them. During the recent general strike and public protests Mallam Sanusi predicted that the nigerian  economy would collapse if fuel subsidy was not completely removed.
But as the  popular uprising could not be stopped  he began to sing a different tune by campaigning for a compromise in the circumstance. At the same time, Mr. Atedo Peterside, another member of the presidential economic team insisted that states like Yobe, Jigawa and Kebbi were being shortchanged to the tune of billions of naira by Lagosians!
But the revelations in the house of representatives committee on fuel subsidy have since exposed the monumental fraud committed by the nnpc and the cartel of fuel importers who were being shielded by the local economic team of imperialism. Did the federal ministry of finance not say the nation spent N1.3 trillion in 2011? Did the CBN not claim it was N1.7 trillion?

But  the committee members   agreed with me that  the figure was over N2 trillion? In some other clime, these voodoo economists would have resigned from public office for misleading the government in such arrogant and negligent manner. But here they have been allowed by the government to engage in impera et divide tactics in defending the anti-peoples’ economic policies imposed on the country by the world bank and the international monetary fund.
Since the central bank did not make  any donation to the victims and the dependents of the hundreds of innocent people who had been  murdered in cold blood in Borno, Yobe, Bauchi, Niger, Kaduna, Adamawa, and  Plateau states by the dreaded sect, Mallam Sanusi should be sanctioned for the  diversion of public funds through the illegal donation.
However, we maintain that the federal government has a legal duty to compensate the victims of civil disturbances arising from the crisis of underdevelopment that is associated with a neo-colonial capilalist society which has been embraced by the Goodluck Jonathan Administration. With respect to compensation for victims of terrorist attacks the federal government should restrain Mallam Sanusi and other government officials from usurping the statutory functions of the National Emergency Management Agency (NEMA) for dubious political objectives.