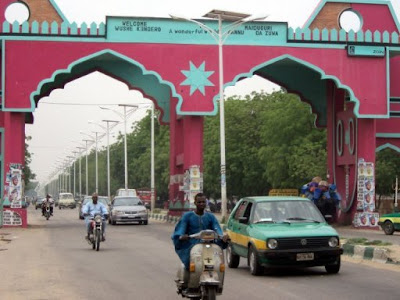 KANO (Nigeria) (AFP) – Two bombs exploded Friday [Feb., 10] near a customs building in Maiduguri the cradle of the Islamist group Boko Haram, which has claimed a series of attacks in the area, witnesses said.
“I went home by taxi when the first bomb exploded. Just two minutes later, another exploded in front of us,” said a resident of the city, Babagana Ari, whose testimony was corroborated by those of other inhabitants.
Residents said the explosion rocked a taxi-scooters to the customs building.
The spokesman of a special army unit created to track down members of Boko Haram in the region confirmed the explosions.
“We have deployed our men on the ground at the scene of the explosions,” said Hassam Mohammed, spokesman for the unit in Maiduguri, refusing to elaborate further
One witness Halilu Adam, “the first bomb had been filed against the wall of the customs building while passengers were waiting taxi-scooters”.
“The second exploded a few meters away. Whole area was cordoned off by soldiers and it is very difficult” to know if there are victims, he added.
The explosions came just hours after authorities announced the arrest of the alleged mastermind of a bombing that killed 44 had at Christmas, Kabiru Sokoto. The senior official alleged Boko Haram was arrested in mid-January but had managed to escape.
On 7 February, the group had claimed responsibility for a suicide attack against a Nigerian army barracks and explosions in Kaduna (north), and threatened to continue operations until all its members would not be “released”.
Boko Haram usually target police stations and other symbols of authority.
It has claimed responsibility for attacks that killed more than 200 deaths since the beginning of the year in Nigeria.
You might also like:
Join Naija247news Alerts on Telegram

National Assembly is not responsible for the delay in assenting 2016...