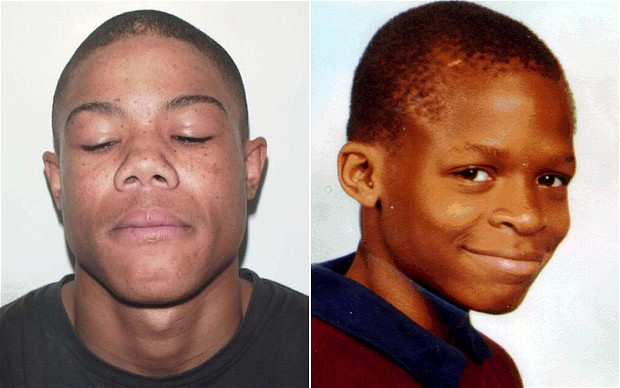 Ricky Preddie, one of the killers of a schoolboy Damilola Taylor, has been recalled to jail for a second time just 16 days after being released.

Preddie, who was jailed for eight years in 2006 for the manslaughter of the 10-year-old, was recalled to prison on Thursday night for breaching the terms of his licence.
He had only been free for 16 days after being released from Pentonville Prison in north London on January 25. Preddie was originally released in September 2010 but sent back to jail last March for breaking the conditions of his licence. On that occasion, he was recalled after being seen in Southwark, south London, and associating with gang members – both against the terms of his release.
Damilola’s death in November 2000 shocked the nation.
He had moved to Britain from Nigeria a few months before he was jabbed in the thigh with a broken beer bottle by a gang of youths as he walked home from the local library after school. The youngster was found bleeding to death in a stairwell near his home in Peckham, south London, where local workmen tried to save his life.
Preddie, and his brother Danny, were convicted of manslaughter and jailed for eight years in October 2006. Ricky Preddie, 13 at the time of the killing, was charged with his younger brother in 2005 when forensic evidence, missed at the time, revealed tiny blood spots and fibres.
Danny Preddie was released early in September last year after serving five years of his sentence.
A Ministry of Justice spokeswoman said: “The decision to release recalled offenders from custody is made by the independent Parole Board – the body solely responsible in law for determining whether or not prisoners should be released.
“Serious offenders released on licence are subject to a strict set of conditions and controls.”Examples include a strict curfew and other restrictions on their movements, as well as frequent meetings with their offender manager.
“If they fail to comply with their licence conditions, they are liable to be returned to custody.”They will also be managed under the statutory Multi-Agency Public Protection Arrangements (Mappa).
Anyone recalled to custody will have their case referred within 28 days to the Parole Board, which will consider whether they can be released, a spokesman for the Parole Board said.
Preddie’s sentence is due to end in May 2013.