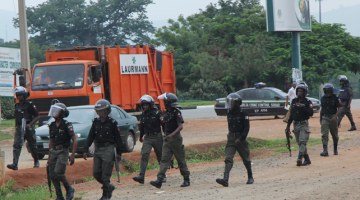 The Security Joint Task Force (JTF) has discovered a large cache of arms and ammunition in Kano State, bolstering recent progress in its bid to halt the terrorist activities of Boko Haram Islamic sect and some aggrieved members of the Movement for the Emancipation of Niger-Delta (MEND).
This was disclosed Wednesday at the Defence Headquarters during a briefing by the Joint Security Information Managers Committee on the security development in the country. Speaking on behalf of the information managers, the Director of Defence Information (DDI), Col. Mohammed Yerima, said the arms cache was uncovered through a tip-off by well-meaning Nigerians.
“Acting on a tip-off by well-meaning Nigerians, the joint team of Police and Army in Kano State discovered a large cache of arms and ammunition in one of the residential areas of Kano”, Yerima said.
The arms and ammunition discovered at the place include 10 AK47 rifles, one tear gas gun, 26 magazines, 107 rounds of 7.22mm special ammunition, 27 assault rifles and ammo (29 rounds), five wallets, one Nigerian international passport, two Police identity cards, one brief case and three GSM handsets.

In a related development, he said that the JTF Operation Pulo Shield in the Niger-Delta has uncovered and named the suspects behind the recent attacks in the region, including the one on an Agip pipeline.
Yerima called on the suspects – Friday Burutu, Lord Onipa, Robinson Agagudu, Eyala Karo, Stanley Uduorie, Para Ekiyes and Rasmus Omukoro to peacefully hand themselves over to the JTF or appropriate authorities, adding that the amnesty programme was not infinite.
He said: “The Joint Task Force, Operation Pulo Shield, has noted with concern the statement purportedly issued by MEND on the attack on AGIP pipeline on February 4, 2012. The JTF condemns the attack in view of all that it portends in the region and wishes to observe that not too long ago, the Niger Delta region was almost plunged into the abyss by agitation for the development of the region.
“The JTF observes further that the Federal Government reacted to this genuine aspiration by embarking on prgrammes that were aimed at addressing the human development and infrastructural deficits that existed. These programmes are ongoing and verifiable. Unfortunately, people who were never part of the agitation have emerged and want to claim amnesty and its benefits by force.
“It should be noted that it is not possible to run an infinite amnesty programme. The names of suspects in that attack are: Friday Burutu, Lord Onipa, Robinson Agagudu, Eyala Karo, Stanley Uduorie, Para Ekiyes and Rasmus Omukoro.”
The DDI urged Niger Deltans to expose the perpetrators of the recent act and warned that there could be collateral damages if individuals and communities decide to provide sanctuary to them.
“The JTF advises Niger Deltans to be mindful of people who are out to swindle them by wrongfully appropriating the identity of the erstwhile leadership of MEND to curry sympathy for their selfish and criminal interest. Therefore, the JTF calls on the good people of the Niger Delta region to rise up and join security agencies to defeat the evil that is rearing its head by giving timely and accurate information on these charlatans through the usual channels,” he said.
The Joint Security Information Managers also disclosed that the newly acquired NNS THUNDER has made immediate impact in less than a month of being commissioned to operate in the country.
They said that the state of the art Navy ship was responsible for the successful arrest of a cargo ship, MT Takordi, laden with one million litres of AGO on the night of January 26.

FG to increase fuel price from next month – Kachikwu