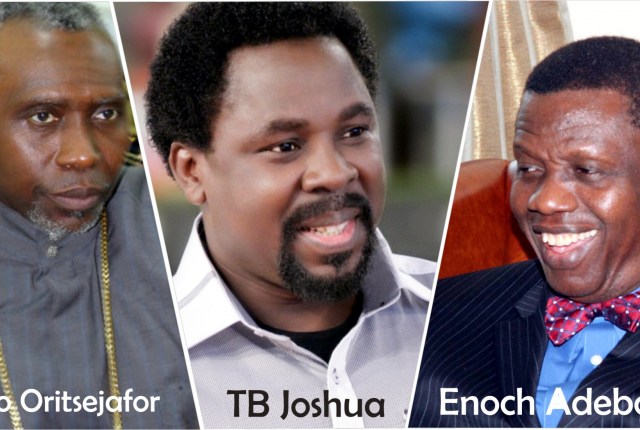 Earlier today, the blogger stumbled on this piece on Prophet TB Joshua’s BLOG and found it rather intriguing…TB Joshua wrote this on 3 Feb., 2012 in response to the calls made by Mega Pastors (as TB Joshua Referred to them in this Piece), i.e. Ayo Oritsejafor and Pastor Enoch Adeboye. He titled the write-up: ‘Boko Haram, Nigeria’s Mega Pastors and their Doctrine on SELF-DEFENSE!’
Excerpts below:
On the issue of Boko Haram, Ayo Oritsejafor was calling on Christians to defend themselves because the government seemed incapable of defending them, on examining the advice of Oristejafor in totality, with what should Christians defend themselves? Is it with Holy water, Crucifixes or Bibles? He may have said it so casually; Christians defend thy self! but he left a question unanswered, How? To go to church with a pistol in their pockets? Or perhaps AK 47 in their babaringa? (African traditional wear)  Did he really mean we should use guns and swords?

Yet he seems not to be the only one spewing fire from his mouth, Another Prominent Nigerian Mega Pastor Enoch Adeboye who has been noted as the world’s 49th most influential person by the prestigious American magazine, Newsweek who is the General Overseer of the Redeemed Christian Church of God (RCCG) In the midst of all the mayhem was quoted to have read a Riot Act to the sect warning its members to stop attacking Christians, their homes and churches or face the consequences.

”We are not allowed to burn mosques or kill people of other religious beliefs but d Bible says we are allowed to Defend ourselves, churches, homes. ‘Be gentle as a dove but Wise as a Serpent’”, Adeboye posted on his Face Book wall yesterday.
At the meeting a fire-spitting cleric (name withheld) whose church is located in Area One, Abuja was asked to teach on the position of the Bible on religious intolerance. The Pastor, according to an eye witness, took his audience from the Old Testament to the New where he cited how Christians were able to defend themselves against any unprovoked attack.
“We need to remind these murderers that Jesus, our Lord and Saviour, is both the Lamb of God who took away our sins and the Lion of the tribe of Judah. He is the Lamb to us but Lion against our foes. And more importantly, the roaring of a lion is purposely for the territorial protection. We used to run before but henceforth we run no more,” the Pastor declared.
Seems no different from what Ayo Oritsejafor suggested, In a statement that chronicled several attacks and killings of Christians and destruction of their places of worship, the Christian leaders said:

“We have hitherto exercised restraint in our public statements on these matters. However, we cannot continue to do so indefinitely, and are determined that in the year 2012, if these unprovoked attacks continue, and Christians remain unprotected by the security agencies, then we will have no choice but to defend our lives and property and take our own steps to ensure our safety and security”.

PROPHET TB JOSHUA’S POSITION ON SELF-DEFENSE:
Now we’ve heard from all these men and women, lets now hear what TB Joshua has to say on self – defense;
Concerning the attacks in the country TB Joshua quoted the book of Daniel 3:16 part of which reads; Shadrach, Meshach and Abednego replied to him, “King Nebuchadnezzar, we do not need to defend ourselves before you in this matter…” after reading This he taught with these words;
We people of God- we do not defend ourselves because we have a defender, which is what the three Hebrew men said – the life of believers in both old and New Testament testify that being faithful to God does not eliminate adversity, we should recognize that it may be a sign of being faithful to God. We cannot use the weapon of the enemy to defend ourselves – when our faith is tested; our endurance has a chance to grow. Adversity can also build you up and strengthen your faith. 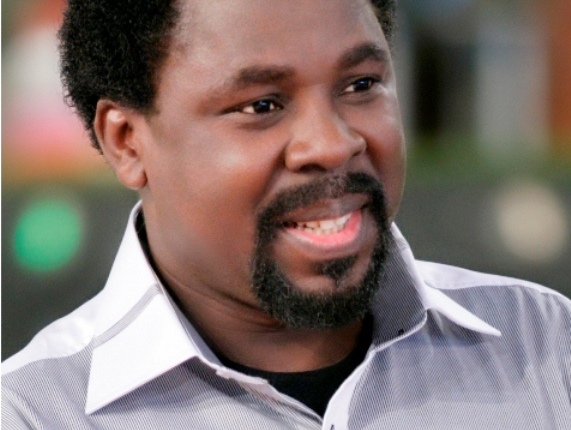 With the responses of these  men, it’s clear whose advice matches up with scriptural rules and principles, one would have expected that Ayo, being the president of the P.F.N was capable of summoning all the opinion leaders in Nigeria, including both Christians and Muslims and other religions to build bridges towards peace than rather adding more fuel to flames. The issues are well launched. Who do you think bears good fruit worthy of emulation? Neither the advice of Ayo or Adeboye to raise our hands or weapons in self-defense squares up to scriptural standards, Our Lord cautioned us against that,
”No more of this,” Jesus said to Peter (Lk. 22:51) and then, further, this was what Jesus proceeded to say – as Matthew records it – ”‘Put your sword back in its place,’ Jesus said to him, ‘for all who draw the sword will die by the sword’.
Please papa Ayo and Adeboye, let love reign and seek to always pray for your perceived enemies. CAN need to be very careful in their advice so that is not taken as a call for Christians to start killing non-Christians.
A concerned Nigerian commented on this issue by saying that from Ayo’s response on the Boko haram issue, He seems to forget that as Christians, we all have a “dark side of the soul” that is waiting to be used by the devil. CAN should not blind to see that a religious war in Nigeria is just what Bork Haram and the forces of the devil want and no matter the situation CAN should not allow themselves to be used by the forces of evil. The love of God in our hearts will not allow us shed the blood of sinners that we pray and seek to convert.
In due time, members of Boko haram will become born again Christians, preaching the gospel all over the world. St Paul is an example.