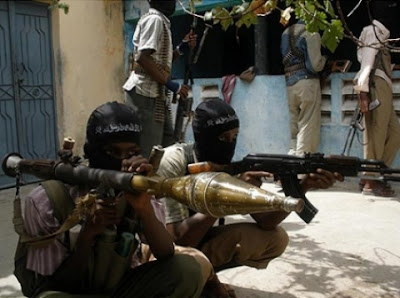 According to THISDAY at least five Boko Haram members have lost their lives while several others sustained gunshot wounds following a shoot out between a combined team of army and policemen and suspected sect members at Mariri on the outskirts of Kano Municipality Monday night.
Residents of the area told THISDAY under condition of anonymity that what happened was that at about 6pm on Monday a combined team of army and policemen accosted a man suspected to be a Boko Haram member who according to the eye witness ran and entered into a house at Mariri Village, which is located on the outskirts of Kano municipality.
He said there was heavy exchange of fire between the security team and the people inside the house, adding that the shoot out lasted for over six hours with heavy explosions that shook the entire place.
THISDAYin Kano learnt that the shoot out lasted for about six hours Monday night and left a bungalow which had been the centre of the exchange of gun fire shattered while the corpses of two victims were mutilated.
It was learnt that when the security team finally gained access into the house they were said to have discovered a large trench dug in the middle of the house and when it was dug opened they discover about 10 AK47 riffles, a large number of magazines and ammunition and bags of fertilizers.
Fertilizer is a key ingredient in the manufacture of locally made improvised explosive devices.
State Commissioner of Police, Alhaji Ibrahim Idris confirmed the incidence and stated that 10 AK47 riffles were recovered in the house with 26 magazines, 106 rounds of ammunition, seven bags of fertilizer with several arrests made while some casualties were recorded.

He, however, said no death was recorded.

IPOB Militants Pelts, Troops in Abia, Nobody Was Killed