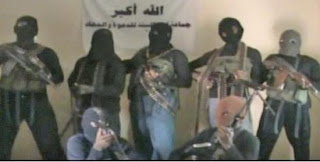 The extremist Islamic sect, Boko Haram may be considering the invitation to dialogue with the federal government as it named some Northern leaders to negotiate with the government on its behalf.
Although, the veracity of the video is being investigated by security agents, as it came on a day that multiple blasts rocked Kaduna with the armed forces as target.
Those named in the video on the Nigerian Television Authority, NTA, are:  Sheik Abubakar Gero, Dr. Shettima Ali Monguno, Alh Ali Bukar Ibrahim, the former governor of Yobe State.
The fourth name listed was not clear in the video to be identified.
The tape which NTA claimed was delivered by an unidentified source featured two figures, fully masked in black.  Only the voice of one was heard, while the other was silent.
“We here confirmed and accept the reported initiative of the President for a dialogue as a welcome development”, the speaker who did not identify himself said.
According to him, the group trusts the named leaders and said “the decision taken by these people can actually change the whole situation”.
You might also like:
Join Naija247news Alerts on Telegram