The authorities of Ajayi Crowther University, Oyo, on Monday, ordered the immediate closure of the institution, following the violent protest by students on Sunday.
The Public Relations Officer (PRO) of the institution, Mr Wale Ademowo, said the school had been shut down indefinitely.

Ademowo, who said the school’s first semester examination should have commenced today, hinted that the management would soon meet to fix the resumption date.

The aggrieved students of the university, the Nigerian Tribune learnt on Tuesday, reportedly went on rampage, to protest the death of a 300-level Computer Science student of the institution, Elvis Abu Paul.

The deceased was said to have died while receiving treatment at the school’s health centre on Sunday.

It was gathered that the 22-year-old student of the university died shortly after he took ill and was rushed to the institution’s health centre as a result of severe headache.

The protesting students accused the health workers of failing to attend to the deceased on time.

However, the school authorities said the deceased was brought into the health centre late and in critical condition.

It was learnt that the deceased, who reportedly appeared before the university’s disciplinary committee with other students last week Thursday over allegation of misconduct, got drunk at a night party on Saturday and had complained of severe headache.

A staff of the university’s health centre said the deceased died of food poisoning.

However, the students insisted that he died as a result of poor quality of services, as they reportedly set the Accounting and Economics department ablaze.

A lecturer in the Management Information and Systems Management Department of the university, Dr Olajide Ogunsola, said the lecturers in the department lost some vital documents in the fire outbreak. 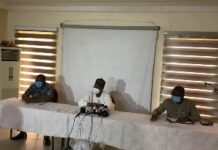 Scores dead as another building collapses in Lagos

Nigeria will collapse without the North, says ACF